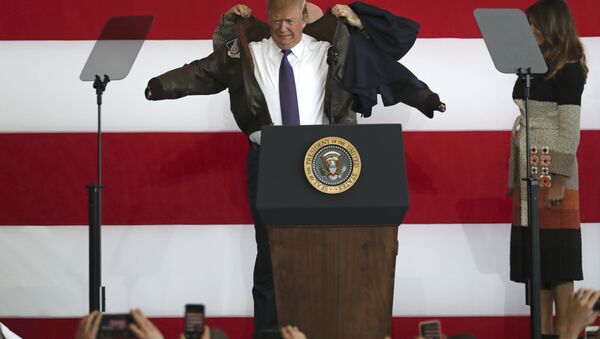 © AP Photo / Eugene Hoshiko
Subscribe
International
India
Africa
A well-heeled Democrat has initiated a big-ticket nationwide ad campaign to bring about the impeachment of US President Donald Trump, and lawmakers on both sides of the fence are taking note.

"Waiting is a mistake," Steyer said, noting the urgency of removing Trump who, he observes, is a "clear and present danger" as long as he occupies the seat of the highest office in the land.

"We believe [Trump] is dangerous to the American people now," Steyer said in an interview with the Guardian.

"People in Congress and his own administration know that [Trump] is a clear and present danger who's mentally unstable and armed with nuclear weapons," added Steyer.

Noting that the 45th US president has engaged in a heated war of words with nuclear-capable North Korea and its excitable leader Kim Jong-un; engaged in obstruction of justice in firing FBI director James Comey; freely taken money from foreign governments in a clear violation of the emoluments clause laid out in the US Constitution, and threatened to shutter voices in the media — and even the voting public — if he doesn't like their message, Steyer is calling for Capitol Hill to step up its impeachment game.

"We believe that waiting is a mistake and we believe the events that will occur over the next year will show that we are right," stated Steyer, cited by the Guardian.

In an example of an early success for Steyer's efforts, Trump himself has responded; giving the impeachment campaign a boost by tweeting that the billionaire environmental activist — said to be worth more than the president, who clearly values his monetary standing — is "wacky & totally unhinged," and "never wins elections!"

While Steyer — who welcomes the Trump response — has not previously run for a political office, he has not ruled out throwing his hat into the ring for a bid to take over US Senator Dianne Feinstein's (D-CA) long held position in Washington.

‘This is Grim’: High-Casualty Pentagon Assessment of US Ground War in DPRK

"I think the fact that [Trump] responded so defensively actually drew more attention to what we were trying to do," Steyer asserted.

"To that I say, ‘Thank you.' If he wants to tweet angrily at us, we would encourage him to do that," he added.

Regardless of Trump's response to impeachment, Steyer acknowledges that removing the president from office must happen as soon as possible.