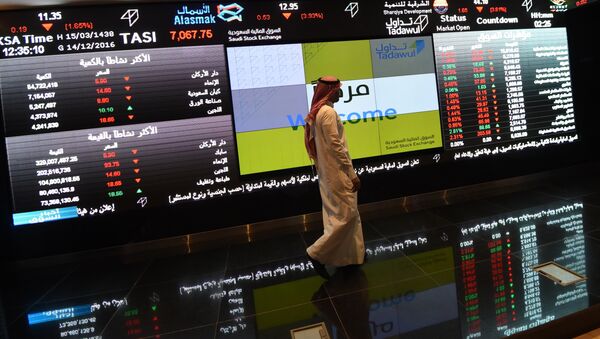 © AFP 2023 / FAYEZ NURELDINE
Subscribe
International
India
Africa
The market for oil, Saudi Arabia's most lucrative export, is unlikely to be affected by the arrest of dozens of former Saudi state officials and at least 11 Saudi princes in an anti-corruption drive, financial analysts have said.

On Sunday, it was reported that 11 Saudi princes, four incumbent ministers of the Saudi government and dozens of former government ministers had been arrested in an anti-corruption drive.

Reportedly among those arrested is prominent billionaire Prince Alwaleed bin Talal, owner of the Kingdom Holding Company which has large stakes in businesses and property around the world including Citigroup, Twitter and several luxury hotel chains.

The new agency will "preserve public money, punish corrupt people and those who exploit their positions," the Saudi Press Agency said.

"Decisions to reduce oil production or military-political tensions between the Saudis and neighboring countries have the most influence on the financial markets and the oil market. It happens periodically: either they can't come to an agreement with Iraqi or with Syria," Korenev said.

Alexander Razuvaev, director of the analytical department at currency brokerage Alpari, said that any reaction to the news by the oil market or financial markets would be short-lived, given that Saudi Arabia is unlikely to withdraw support for agreements between OPEC and other oil producers which reduced production and raised prices.

"There isn't likely to be any real reaction on the world markets, all that might happen is some small volatility on the local stock market." The indexes might drop, but this will only be a short-term event," Razuvaev said.

In late October, the price of the industry standard Brent crude moved above $60 per barrel for the first time in more than two years. On Friday, the price increased to $62.07, recouping a loss earlier in the week to finish 2.7% higher than the previous week.

Would very much appreciate Saudi Arabia doing their IPO of Aramco with the New York Stock Exchange. Important to the United States!

Saudi Arabia is also motivated to keep oil prices higher because of its planned IPO of national oil giant Saudi Aramco. Last week, Saudi Crown Prince Mohammed bin Salman told Reuters that the IPO, which is set to be the biggest ever, is planned for 2018.