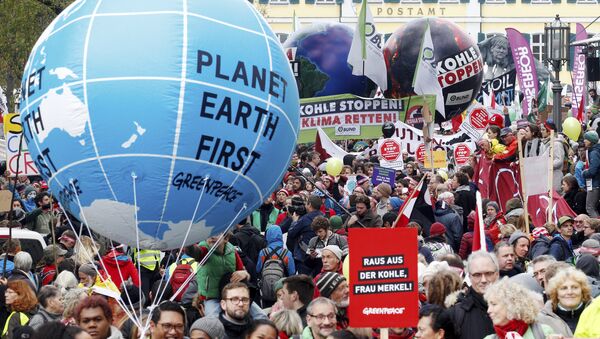 BERLIN (Sputnik) — About 7,000 people in the western German city of Bonn participated in Saturday's march ahead of next week's UN Climate Change Conference, media reported. According to Rheinische Post newspaper, the activists protest against coal usage and have called for switching to alternative energy sources.

Protest Held in Bonn Ahead of UN Climate Summit. https://t.co/44PCGndBrm

On November 6-17, the 23rd session of the Conference of the Parties (COP 23) to the UN Convention on Climate Change (UNFCCC) will take place. About 25,000 people are reportedly expected to attend the talks. French President Emmanuel Macron, German Chancellor Angela Merkel and other leaders are expected to fly to Bonn to show their commitment to fight climate change.

The Paris climate deal, created within the UN Framework Convention on Climate Change was ratified by 169 countries out of 197 parties to the convention. The agreement entered into force in November 2016. In particular, the Paris accord set a target of limiting global warming to 1.5 degrees Celsius (2.7 degrees Fahrenheit) — or 2 degrees at the most — by the end of the century by means of reducing greenhouse gas emissions.