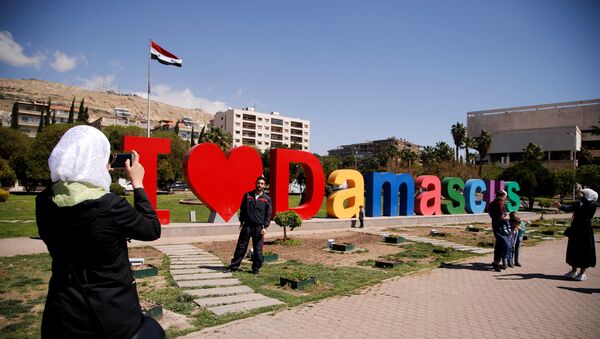 Two Sweden Democrats (SD) MPs, who have taken the private initiative to visit Syria, have reported that both Syrian government sources and UN representatives indicate that international sanctions primarily affect civilians, which raised questions about Sweden's current line on Syria.

By their own admission, Sweden Democrats MPs Martin Kinnunen and Marcus Wiechel booked a so-called "individual foreign trip" to Syria to obtain a clearer picture of the situation, not least because the war in Syria has affected Sweden through waves of refugees and potential terrorists commuting between Scandinavia and the Middle East.

"For us, it is essential to learn more about what the conflict is about, and how to help in the best way possible. The information given in Sweden from here is inadequate just because there are very few Westerners here, although there are more and more people visiting the country now," Martin Kinnunen told Nyheter Idag, a news outlet.

Swedish Royal Shocks Countrymen With Plans to Make Wine in Crimea
The efficiency of the EU-imposed sanctions on Syria was one of the topics of the agenda of the visit.

"Without taking a stance on them as such, I can say that all parties we meet, be it the church, the government or UN agencies, all feel the same," Kinnunen said. "The Syrian government thinks the sanctions should be completely removed. UN representatives in place believe the sanctions should be mitigated because they mostly affect civilians," Kinnuned said. "We have not taken a stance and are here to gather information. Then we shall see whether it affects the party's policy in the future," he concluded.

​SD group leader Mattias Karlsson was supportive of his party comrades' Syria trip, while questioning Sweden's policy in Syria. According to Karlsson, who called it "strange prioritizing," Sweden does not contribute a single krone for food to the most distressed, while raining money to support healthy young men who immigrate from Syria illegally, Nyheter Idag reported.

​In Sweden, however, their visit was met with severe criticism.

The Swedish media were particularly triggered by photographs of SD MPs under the portrait of Assad, with Aftonbladet suggesting they could be used for propaganda purposes.

"If you are going to enter Syria legally, you must obtain permission from the Syrian state. You must have a visa," Kinnunen explained. "We also meet with representatives from civil society, the UN and all UN agencies," he added.

​Nevertheless, columnist Patrik Oksanen of Hela Hälsingland went so far as to call SD "Putin's useful idiots" in a tweet.

The EU's sanctions against Syria include an oil embargo, investments and technology exports restrictions, as well as a freeze of the Syrian central bank's assets within the EU.