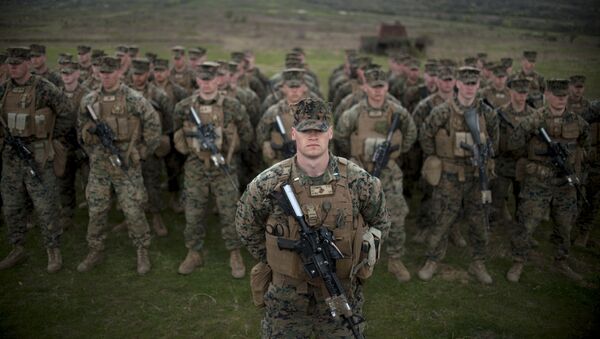 © AFP 2023 / NIKOLAY DOYCHINOV
Subscribe
International
India
Africa
A former US Marine Corps drill instructor has been accused of savagely abusing three Muslim recruits, and faces a court-martial on charges including cruelty and maltreatment. The case highlights the rarely acknowledged tradition of "hazing" in the US military, which often produces catastrophic and fatal results.

Gunnery Sergeant Joseph Felix, a former US Marine Corps drill instructor, targeted three Muslim recruits, prosecutors have claimed at the opening of his court-martial on charges including cruelty and maltreatment.

​Felix is alleged to have punched, choked, and kicked recruits at the Marine Corps' training center in Parris Island, South Carolina, and in March 2016, these actions could well have resulted in at least one death.

Trainee Raheel Siddiqui, a 20-year-old from Michigan, was repeatedly slapped by the instructor, and subsequently fell three storeys to his death.

Pushed to the Edge

The incident was declared a suicide, but Marine Corps officials have since uncovered widespread hazing of recruits and young drill instructors, identifying up to 20 individuals possibly tied to misconduct.

Lieutenant Colonel Joshua Kissoon, commanding officer at Parris Island, who was fired after Siddiqui's death, also faces a court-martial, charged with making false statements, failing to heed an order and other charges.

Prosecutors claim Felix and Kissoon told recruits not to talk about the incident outside the unit.

Felix also faces three counts of maltreatment toward Siddiqui and the two other Muslim recruits, as well as nine counts of violating an order, making false statements, and being drunk and disorderly.

One of the targeted recruits, 21-year-old Rekan Hawez, came from Kurdistan to the US as a baby. He testified Felix began hazing him after finding out he was a Kurd — Felix routinely called him "Kurdish," "ISIS" and "terrorist."

One night, Felix is said to have made his entire platoon drink multiple glasses of chocolate milk before exercises, and when one recruit vomited, Felix made another recruit drink the vomit.

The disgraced instructor also order his platoon into a laundry room to perform exercises on a different night, and forced Hawez to climb into an industrial dryer.

Ameer Bourmeche, a 23-year-old lance corporal at Camp Pendleton in California, said he was roused awake in the middle of the night in July 2015 by shouts of "Where's the terrorist?"

Felix and another drill instructor, Sergeant Michael Eldridge, then marched him to the barracks shower room, where Felix elbowed him in the chin — they smelled of alcohol, Bourmeche testified.

He also said Felix and Eldridge ordered him to do push-ups and other exercises in the shower, then told him to climb into an industrial-size clothes dryer.

The dryer was then turned on with him inside on three separate occasions — each time, the rogue instructors asked whether he renounced Islam. He allegedly suffered burns in the dryer.

Defense counselor Clay Bridges told jurors that testimony by Bourmeche and other recruits are mere "boot camp stories" which had been conflated, are contradictory and "blown out of proportion."

The trial is scheduled to last at least a fortnight.

US Military's History of Hazing

The traumatizing mistreatment of the plaintiffs is notable for its evident Islamophobic character. However, the bullying and harassment of US military recruits is a veritable tradition — even if it's often only after particularly egregious incidents the practice is acknowledged in the mainstream.

In 2011, Pvt Danny Chen committed suicide due to racial slurs and physical attacks from a group of his superiors. pic.twitter.com/PHybpCRzUJ

​For instance, in 2011, 19-year-old US Army Private Danny Chen committed suicide a mere day before his scheduled transfer to Afghanistan.

Chen suffered from severe stress due to prolonged hazing and harassment, which took a significant toll on his mental health and performance of regular duties.

It's alleged he was dragged over sharp rocks, forced to crawl over dangerous terrain while being beaten by instructors, and ordered to do pushups with water in his mouth, among other torments.

That same year, Lance Corporal Harry Lew, also posted in Afghanistan, shot himself with a machine gun after a group of fellow soldiers hazed him one evening for falling asleep on the job. He was kicked and punched in the head, had sand thrown in his face, and threatened with extreme bodily harm.

In 2012, Sergeant Phillip Roach collapsed to the ground and suffered multiple seizures, after participating in a military hazing ritual that involved a blow to the chest with a large wooden mallet.

As a result of the blow, Roach suffered bruising, staples in his skull sustained from the fall, and a heart condition called commotio cordis that can be fatal "up to 65 percent of the time."

There are suggestions Roach had previously blown the whistle about hazing at the site, and had been given duties below his rank as a result.

In 2013, a Navy Chief hazed female sailors by forcing them to march onboard the Jason Dunham destroyer ship, with bags of their own feces — a hazing punishment doled out after some sailors attempted to use toilets that were not working.

All female sailors were also ordered to clean the commodes, without proper gear such as gloves or mouth covers, and 13 were forced to march across the pier and dispose of the waste.

The incident was witnessed by two military commanders, who failed to report the incident — they subsequently dishonorably discharged as a result.