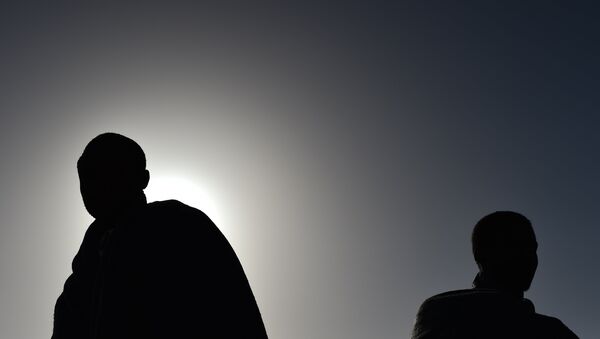 © AFP 2023 / GABRIEL BOUYS
Subscribe
International
India
Africa
Recent revelations by the Guardian expose probably the ugliest and most ruthless side of the civil war in Libya.

The Guardian has quoted an array of witnesses as saying that rival factions in Libya regularly resort to male rape in order to exert political pressure.

According to the Guardian, the relevant reports were first produced by a Le Monde journalist, who cited a spate of cases of Libyan men being sodomized by opponents with rockets and broom handles, among other things.

EXCLUSIVE: Gaddafi's Son 'Returning to Politics', 'He Will Never Leave Libya'
In some cases, men were forced to rape one another for the macabre delight of their captors: they were put behind bars and other prisoners were ordered to assault them under pain of death.

One of the victims, who went only by the name Ahmed, was quoted by The Guardian as saying that "nobody can escape it."

"They separate you to subjugate you. 'Subjugate the men', that's the expression that they use. So that you never hold your head up again. And they were filming everything with their phones," he said.

Another witness went further by claiming that male rape was in place in Libya under the country's former leader Muammar Gaddafi as an alleged "instrument of war."  Gaddafi was toppled and then killed during a violent uprising in the fall of 2011.

The witness alleged that "Gaddafi loyalists raped during the [2011 Libyan] revolution," and that "once they were defeated, they suffered the same violence."

Libya's Security Forces Reportedly Find Burial Sites of Over 20 Christians
The Guardian recalled that male rape remains a strong taboo in Arab countries, with all those abused feeling "too damaged to rejoin political, military or civic life."

The political crisis in Libya shows no sign of abating as the country has de-facto ceased to exist as a single state: the internationally recognized Government of National Accord operates in the capital Tripoli, while a vast part of the country is controlled by the elected parliament, backed by the Libyan National Army, headquartered in the city of Tobruk.There are also tribes and armed groups not abiding by either of them.