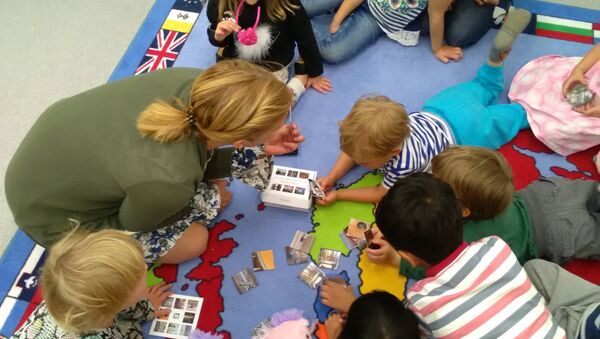 © Photo : Facebook / Garden City Playschool
Subscribe
In a bid to become more gender-neutral, some kindergarten and daycare centers in the Finnish capital Helsinki have abolished the country's traditional Father's Day. Instead, a presumably less offensive "Relative's day" will be celebrated.

Yliskylä and Kulosaari daycare centers in Helsinki have chosen to replace "Father's Day" with a more neutral alternative called 'läheisenpäivä' or "Kinsman's day," the Finnish Iltalehti daily reported. At Kulosaari, the decision was made as a nod to children's rights.

"There are different kinds of families in Helsinki. Here, we do focus on the child's interests. For children, it is important that close relatives participate in our activities. Now we shall see what kind of reception it gets," day care director Ria Sotka said.

Sotka admitted that the initiative received both positive and negative responses, with some people being upset about the decision. Nevertheless, Sotka chose to focus on the optimistic replies.

"People think it is a good idea," Sotka said.

The next "Kinsman's day" will be celebrated with a breakfast next Thursday.

Sign of the Times: Finland Switches to Gender-Neutral Roadway Markers
At present, daycare centers in Helsinki are free to decide whether to celebrate Father's Day or not. The City of Helsinki announced that Father's Day will not be abolished as such, and fathers, like other close relatives are warmly welcome to participate in family activities.

Child ombudsman Tuomas Kurttila entered the debate by appealing to the municipalities to leave Father's Day and Mother's Day as they are, implying that children needn't be overprotected from disappointment, the Finnish daily Hufvudstadsbladet reported.

Traditionally, Father's Day is celebrated on November 12 and has been a fixture in the Finnish calendar since 1970. Since 1987, it has been included among so-called "flag days," when hoisting national flags is considered the done thing.

With a population of 650,000, Helsinki has about 330 municipal daycare centers.

At present, about a fifth of Finnish families are single parent families. In 2010, there were roughly 102,000 single mother families, as opposed to only 16,000 single father families, Statistics Finland reported.