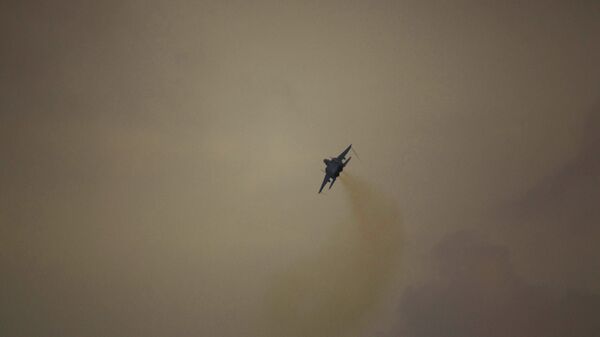 Tel Aviv and Damascus that have been in the state of war since the establishment of the State of Israel in 1948, have repeatedly exchanged tit-for-tat attacks.

BEIRUT (Sputnik) — The Syrian Foreign Ministry has sent a letter to the UN Security Council over an Israeli airstrike on a copper factory in Hassia area in Syria's Homs province, according to the ministry's documents published on Thursday.

"Yet another aggression of Israel… shows that Israeli authorities are not satisfied with the state terrorism against the Arab population in occupied Palestine, Syria and Lebanon. They want to play the role of the official agent of terrorism," the ministry's document read, as quoted by the SANA news agency.

Damascus' statement comes a day after a Lebanese security service source told Sputnik that Israeli aircraft had carried out an attack on targets in Syria from Lebanon's airspace.

According to a Syrian air force source, the Syrian army's 72nd division launched surface-to-air missiles at Israeli planes in the Homs province in response to the airstrike.

Netanyahu at Talks With Shoigu: Israel Will Never Allow Iran's Bases in Syria
Syria and Israel, which have been in a state of war for decades with a peace treaty never signed, have been repeatedly engaged in tit-for-tat attacks, with the latest taking place on October 21, when the IDF targeted Syrian artillery in response to an alleged shelling in the disputed territory of the Golan Heights, which were seized by Israel during the Six-Day War in 1967, prompting the condemnation of the international community.

The attack came just days after the IDF attacked a Syrian air defense battery near Damascus in retaliation for an alleged shelling of an Israeli jet performing "a routine reconnaissance mission in Lebanese airspace." However, according to Damascus, the Israeli plane violated Syria's airspace and therefore attacked by its defense systems.

Israeli Prime Minister Benjamin Netanyahu stated earlier that Tel Aviv will continue to carry out airstrikes on targets in Syria, saying that IDF would conduct military operations if intelligence data confirms a planned weapons transfer and if the mission is "operationally feasible."