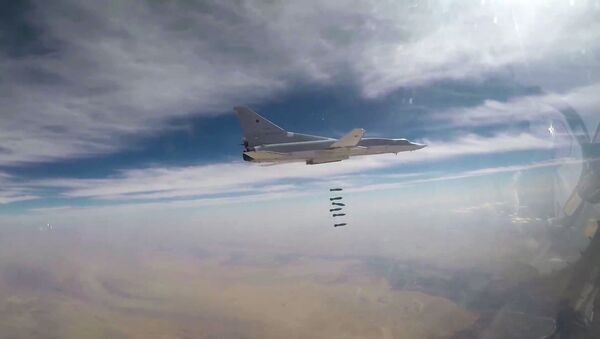 © Photo : Russian Defense Ministry
/
Go to the photo bank
Subscribe
Daesh arms and ammunition depots, as well as fortified areas in Deir ez-Zor have been targeted.

Russian strategic Tu-22M3 bombers, which were covered by Su-30SM fighters deployed at the Hmeymim airbase in Latakia, have launched an airstrike on Daesh targets in Syria, according to the Defense Ministry's statement.

"Six long-range Tu-22M3 bombers took off from the territory of Russia that flew over the territory of Iran and Iraq have launched a massive airstrike on the terrorist targets near the city of Abu Kemal in the Deir ez Zor province."

The long-range bombers' strike comes following a massive strike with cruise missiles carried out on Tuesday by a Russian submarine from the Mediterranean on the Daesh targets in Abu Kemal.

Video Shows Challenging Military Operations by Syrian Army in Deir ez-Zor
Russia is currently engaged in assisting the Syrian army's operation in the Deir ez-Zor province aimed to completely eliminate terrorists' presence there, which was immediately launched after the breaking of the three-year Daesh siege of the city of Deir ez-Zor.

In the course of the operation, the Syrian governent forces gained control of the largest Daesh hotbed in the province, the town of al-Mayadeen.

According to data provided by Russian authorities, over 90 percent of the Syrian territory has already been freed from terrorists, with Defense Minister Sergei Shoigu saying that the military operation launched in September 2015 at the request of the Syrian leadership is close to its end.