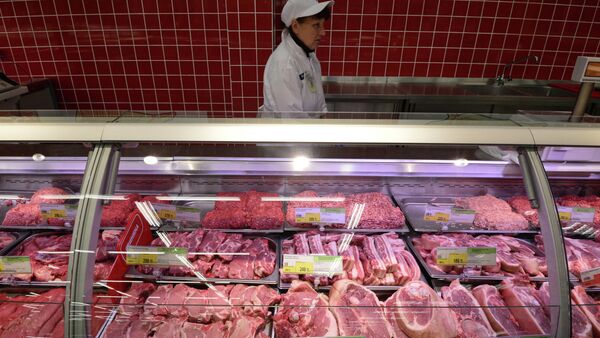 Russia's Rosselkhoznadzor watchdog has commented on the possibility of exporting beef and poultry supplies to Saudi Arabia amid the recent visit of the Saudi king to Russia.

MOSCOW (Sputnik) — Russia might begin supplying beef, goat and sheep meat, as well as poultry and their by-products to Saudi Arabia in the near future, Russia's Federal Service for Veterinary and Phytosanitary Surveillance (Rosselkhoznadzor) said in a statement Wednesday.

"The imports can begin immediately after the inclusion of Russian companies into the list of enterprises approved to export [their products] to Saudi Arabia. This technical work will be completed by the SFDA within a few days," the statement read.

The statement comes following a meeting between representatives of Rosselkhoznadzor and the Saudi Food and Drug Authority (SFDA). Russia has gained access to the Saudi Arabian market to sell its beef, poultry, goat and sheep meat, as well as other animal products, including dairy products and table eggs.

Additionally, the Russian agricultural watchdog was allowed to independently approve Russian enterprises that had met Saudi Arabia's requirements and were authorized to deliver their products to the kingdom.

The inspections of Russian enterprises by Saudi inspectors took place in mid-May this year. In September, Saudi Arabia lifted the ban on the supply of Russian beef, goat meat, poultry and eggs, as well as processed meat products to the kingdom after competent Russian authorities had taken the necessary measures to control hand-foot-and-mouth disease and bird flu.

Rosselkhoznadzor has recently reported that Russia has increased its exports of grain, and its derived products, to Saudi Arabia by 22 percent to 854,000 tons in comparison to the same period last year.

The deal comes in the wake of the visit of Saudi King Salman to Russia, which is considered a historic event for both countries, as  President Putin's invitation was accepted already back in 2007 by the late King Abdullah, but was postponed due to different views on the Syrian crisis.