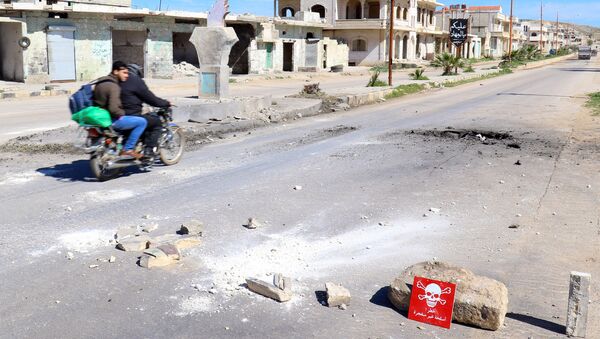 The Permanent Mission of Russia to the United Nations announced that the OPCW-UN report on the April attack in the Syrian town of Khan Sheikhoun looks more like an amateur document and is based mostly on assumptions and the selective use of facts.

"Russia has distributed as an official document of the UN Security Council and General Assembly its preliminary assessment of the seventh report by the OPCW-UN Joint Mechanism on the investigation of cases chemical weapons’ use in Syria," the mission said in a statement.

Nusra Preparing Sarin 'Provocation' in Syria's Khan Sheikhoun, Kefraya - Source
The report looks more like an amateur document and is based mostly on assumptions and the selective use of facts, the mission added.

Earlier, the United Nations in a report published Wednesday accused the Syrian government of using chemical weapons in Khan Sheikhoun, claiming that "government forces continued to deliberately target civilians, including through the use of chemical weapons against civilians".

On April 4, the National Coalition for Syrian Revolutionary and Opposition Forces, supported by the United States, blamed Damascus for the Khan Sheikhoun chemical weapons incident that killed 80 people and injured many more. The Syrian army rejected the accusations, laying the blame on local militants.