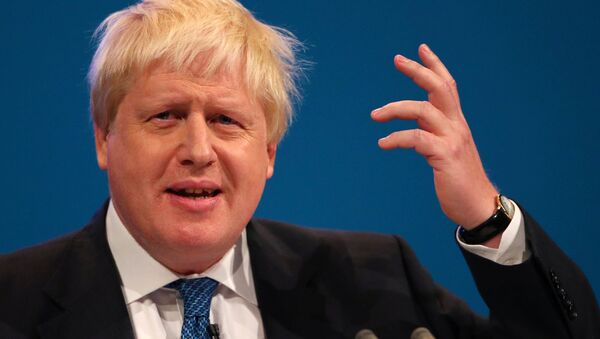 British Foreign Secretary Boris Johnson has commented on the recent statement made by Prime Minister Theresa May who voiced concern over alleged Russia's attempts to meddle in foreign states' democracies, a claim repeatedly denied by Moscow.

UK Foreign Secretary Boris Johnson has said that he saw no evidence of alleged Russia's interference in Britain's democracy.

When asked to comment on a statement made by UK Prime Minister Theresa May earlier in the day, Johnson, who was one of the most vocal supporters of Brexit, has said, "No, I haven't seen any, not a sausage… As far as I know they have played no role."

The British prime minister said that she takes alleged "Russian attempts to intervene in the electoral processes or in the democratic processes" in other countries "very seriously."

May's statement came in the wake of a newly launched probe by the UK Electoral Commission into the funding of the campaign supporting Brexit by a pro-Leave campaigner.

The development comes just days after the British press reported that UKIP whistleblowers informed the Electoral Commission that some individuals, remunerated by US-based right-wing news outlet Breitbart, had been working as unpaid UKIP volunteers, which could be interpreted as an indirect political donation. Nevertheless, Gawain Towler, the spokesman for the UKIP, has denounced the media claims as "ridiculous," in a comment to Sputnik.

In a separate inquiry, Labour Member of Parliament Ben Bradshaw asked the government earlier in October to examine the origin of some of the funds used in the Brexit campaign amid general concern about foreign influence on it.