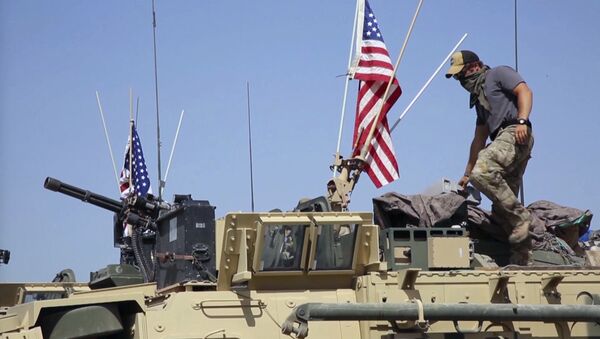 © AP Photo / APTV
Subscribe
Ekaterina Blinova
All materialsWrite to the author
The US' controversial foreign strategy in the Middle East and North Africa prompts two fundamental questions: "Who is in charge in Washington, and what do they want?" former Canadian defense analyst and ex-diplomat Patrick Armstrong told Sputnik, revealing the three ways in which the US usually ends its wars.

"Whatever the motive for Washington's involvement in Syria was — pipelines, weakening Russia or Iran, creating chaos or whatever else — it has failed," Patrick Armstrong, former analyst in the Canadian Department of National Defense specializing in the USSR and Russia and a counselor in the Canadian Embassy in Moscow from 1993 to 1996, told Sputnik.

"The momentum has changed and defeat here, and in the other US interventions in MENA [the Middle East and North Africa], is coming," Armstrong stressed.

US Syria Strategy: A Riddle, Wrapped in a Mystery, Inside an Enigma

The situation in Syria, starting with reports that US Air Force aircraft had been allegedly spotted evacuating Daesh (ISIS/ISIL) field commanders in Syria to observers' statements that the US-led coalition's liberation of Raqqa is nothing but a "puppet show," raises a lot of questions.

US' Plan B? From Alleged Evacuation of Daesh to the Murder of Russian General
Will the US continue to support the Kurdish-dominated Syrian Democratic Forces (SDF) in Raqqa in accordance with the "governance plan" outlined by the US-allied militias in April 2017? Will the Pentagon help the Kurds maintain control over oil fields in Deir ez-Zor, which the latter recaptured from Daesh more than a week ago?

On the other hand, Washington's unwillingness to endorse their Kurdish allies' independence claim in Iraq has prompted some commentators to assume that Tehran, which helped Baghdad retake oil-rich Kirkuk from the Peshmerga, has managed to outplay the Trump administration in the region and prevent the US from creating a foothold in Iraqi Kurdistan against Iran.

However, these and many other questions concerning the US involvement in the region "cannot be answered," Armstrong said, "because no one knows the answer to two fundamental questions: Who is in charge in Washington? What do they want?"

Has Syria Turned Into Yet Another 'Vietnam' for US?

Although it has become clear that the US Mideast plan is in tatters, "Washington isn't good at admitting defeat," the former diplomat highlighted.

"[The US] always invents another scheme — Kurds in Syria, assassination teams in Afghanistan — to postpone the day," Armstrong underscored. "US wars end in one of three ways: first, full victory (1945), second, destruction leaving chaos behind (Kosovo, Somalia or Libya) or, third, panicked evacuation (Vietnam). At the moment, the third appears the most probable."

Still, according to the former defense analyst, whether US President Trump "can break the habit" has not been excluded.

"But here we see another mystery: When campaigning he appeared to understand that these wars had to be stopped, but since taking office he has been hobbled by the Russo-maniacal frenzy of the media and intelligence leadership," Armstrong emphasized.

"So, at the end, all questions come back to: Who is in charge, and what do they want?" the Canadian analyst asked.

Up until now, the US' Syria plan has appeared to be clear: On July 30, 1986, the CIA presented "a number of possible scenarios that could lead to the ouster of President [Hafez] Assad," the father of incumbent Syrian leader Bashar al-Assad.

The secret memo stated that "US interests in Syria probably would be best served by a Sunni regime," and highlighted that despite sectarian tensions having been muted, "the potential for serious communal violence remains" with "remnants of the [Muslim] Brotherhood" as "leaders in a new Sunni opposition movement." The timing and the trigger of the unrest remained the two major issues.

Perhaps 1986 was not the best moment for a coup. As Pulitzer Prize-winning investigative journalist Jack Anderson wrote in his "Washington's Letter," Hafez Assad's close ties with the USSR made him a tough nut to crack: "Attacking Syria would mean taking on the Soviets; it wouldn't be the cheap and easy operation that [US President Ronald] Reagan brought off in Grenada and Libya. In poker terms, it's the difference between a penny ante and a no-limit game."

The journalist noted, "Syria… still has thousands of Russian advisers and huge quantities of Soviet weaponry and is Moscow's most dependable ally in the Middle East."

The Fall of the USSR Opened Window of Opportunity for US

After the collapse of the USSR in 1991, pro-Soviet regimes in the Middle East, Central Asia and Latin America seemed to be easy prey for the US war planners.

Old Habits Die Hard: US Digs Up Cold-War Tool Seeking to 'Bankrupt Russia'
Retired US Army General Wesley Clark, a former Supreme Allied Commander Europe of NATO and a 2004 Democratic presidential candidate, recalled during his 2007 speech at the Commonwealth Club of California that in 1991 then-Undersecretary of Defense for Policy Paul Wolfowitz told him that the US had "five or 10 years to clean up those Soviet client regimes" in Syria, Iran and Iraq.

Diplomatic cables released by WikiLeaks showed that in 2006 former US Ambassador to Syria William Roebuck informed Washington about "potential vulnerabilities" of Syrian President Bashar al-Assad's government and the "possible means to exploit them."

In 2012 the Obama administration and the US Defense Intelligence Agency (DIA) were well aware that the Salafists, the Muslim Brotherhood and al-Qaeda in Iraq (AQI) were "the major forces, driving the insurgency in Syria," since the very beginning of the unrest in the country. As ex-DIA chief and former national security advisor Michael Flynn noted in his 2015 interview with Al Jazeera, "it was a willful decision" by the US president at the time.

However, it means that nothing much has changed since 1986 when the CIA regarded the radical Muslim Brotherhood as a potential spearhead of the Syrian opposition movement.

Russia Seeking 'Honest and Comprehensive Answer' From US

The two-year-long Russian air campaign in Syria, which apparently caught US strategists by surprise, has forced Washington to make adjustments to its plans. So, what's next?

After an October 23 meeting with Iraqi Foreign Minister Ibrahim Jaafari, Russian Foreign Minister Sergei Lavrov stressed that Moscow wants Washington to explain what "the new line" in the US Syrian policy is.

The Russian foreign minister emphasized Washington's calls for the creation of local "councils" on the territory of the sovereign Syrian Arab Republic and the mass exodus of Daesh terrorists from Raqqa during the US-led operation in the city.

"We address these questions to Washington and expect to receive an honest and comprehensible answer," Lavrov underscored.

000000
Popular comments
Historically the Americans end wars only in 1 way. They lose the war and get the hell out leaving the mess behind for others to clean up.