US Russia Investigation is a 'Dirty Campaign to Neutralize Trump' - Analyst 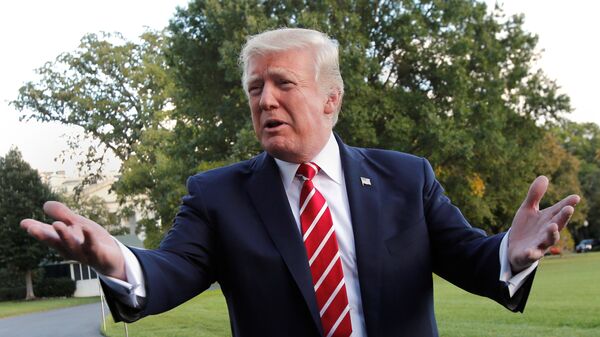 © REUTERS / Yuri Gripas
Subscribe
International
India
Africa
Under the probe into the alleged Russian meddling in the US election, Donald Trump’s former campaign manager Paul Manafort and his deputy have been indicted on 12 counts. Political analyst Gilbert Doctorow told Radio Sputnik that this investigation has nothing to do with real legal procedures and explained why it will fail to achieve its goals.

Sputnik: What is all the fuss about if the indictment does not even mention Russia and is absolutely unrelated to the Trump campaign?

Gilbert Doctorow: Well it is not totally unrelated to the Trump campaign and it is unrelated to the essential charges that were leveled against Trump from the beginning of acting in collusion with the Russians and having subjected the United States to Russian influence. All of that was not proven. If you cannot find any proofs that are relevant then you find proofs that are not relevant and claim that they are important.

But they are in a way important. You can’t dismiss this indictment against Manafort as being an irrelevancy, it isn’t. What it does tell you is about the quality, the character of the people whom Donald Trump recruited to wage his campaign. And what you see in this is what’s been called in the past, sleaze. He has had some very disreputable people who were providing him with critical assistance and it casts doubt on Trump’s judgement and ability to find worthy assistants. When he finds those worthy assistants, regrettably, he betrays them. There are a lot of things about Trump’s human resources capabilities that are in doubt. Of course, he is operating in what he called a swamp or sewer.

Sputnik: What do you think about the timing of these pressed charges? Who is this move aiming to discredit? There is an agenda here and this agenda is not going away.

Gilbert Doctorow: Under the guise of a judicial investigation, we have a purely political campaign against Donald Trump. That is the regrettable reality. His opponents have been throwing at him anything they can. Now they’ve got Paul Manafort who, very possibly, is guilty of money laundering, certainly it looks as if he is guilty of concealing income and tax evasion, and he happens to have been the campaign manager of Donald Trump.

Sputnik: What is the whole point in this Mueller investigation if there is no such crime as collusion in the law in the US? How can they move forward and how can they define this thing?

Gilbert Doctorow: They are spreading confusion and chaos and discrediting the United States as a whole. But that is not a new development, unfortunately. All these moves were made against President [Bill] Clinton for his scandalous sexual escapades in the White House. Those moves by then-Republicans had no concern about how they were dragging the whole country through the mud.

That is exactly the same kind of dragging the US through the mud, whatever the cost, to remove Donald Trump or to neutralize Donald Trump. Removing Trump still remains questionable because there you get beyond political campaigns or witch hunts to real legal investigations. They have nothing on Trump legally. and what they do have is a dirt campaign to neutralize him by keeping him constantly busy fighting off allegations and in that sense this administration is in total chaos.

Sputnik: How far, do you think, Congress and the FBI would go in this never-ending witch hunt against Russia and Trump? Will it be an end to it?

Gilbert Doctorow: It will be an end to it. Once the special prosecutor  sets out everything he possibly can and it looks like he’s done a pretty good job of that, although it has very little relevance to legal wrongdoing by the president. That will be the end of it. The path will run out in the sand and after that Congress will have to draw back.

Gilbert Doctorow is a Brussels-based independent political analyst and author. His latest book "Does the United States Have a Future?" was released on October 12, 2017.