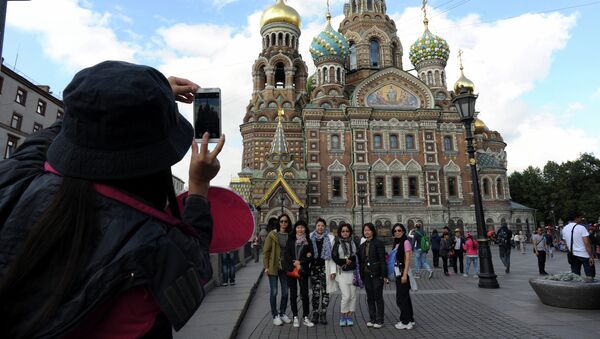 © AFP 2021 / OLGA MALTSEVA
Subscribe
The Russian prime minister, who is on a visit to China, has said that Moscow-Beijing relations are at their highest level in the history of bilateral ties.

BEIJING (Sputnik) — Russia may consider the possibility of continuing visa facilitation for Chinese tourists to allow groups of three or more people to enter the country without visas for up to three weeks, according to Prime Minister Dmitry Medvedev.

Under the current Russian visa policy for China, only a tourist group of five or more people has the right for the visa-free travel to Russia for up to two weeks.

"In the near future we plan to consider further extension of this practice. At the moment, this document is being negotiated in the Russian government to make these groups even smaller, three or more tourists, and the period of stay could be extended to three weeks," Medvedev, who is currently on a three-day official visit to China, said.

'Red Tourism': Over 1 Mln Chinese Tourists Visited Russia in 2016
The prime minister stressed that the number of Chinese tourists in Russia had increased significantly over the past few years.

"In general, about 1.2 million Chinese visited our country last year. This year, according to preliminary data for the first six months, we have had an increase of approximately 20 percent," Medvedev pointed out.

Commenting on Russia's preparations to host the 2018 FIFA World Cup, Medvedev has said that Russia is expecting President Xi Jinping to attend the football event.

"We all love football, and the fact that […] Xi Jinping loves football is also not a secret. So we will certainly be happy to be waiting for the Chinese leaders and, in general, everyone who wants to go to the World Cup in our country," Medvedev said during an online conference with China's Internet users.

According to the prime minister, Russia and China have equal, friendly relations, which are now at the highest level in their history.

"I think that our relations over the past years have reached such a level of development that they are to some extent free from even elections results, because these are strategic relations and these relations are focused on the future, on future generations," Medvedev indicated.

Russia and China have been steadily intensifying their bilateral relations, which is reflected by a high level of trade, solidarity on a number of international issues and a series of mutual visits by high-ranking officials. Both Russian President Vladimir Putin and his Chinese counterpart Xi Jinping have noted the high level of bilateral relations on numerous occasions. Putin and Xi agreed during last week's phone call to meet each other on the sidelines of the Asia-Pacific Economic Cooperation (APEC) forum in early November.

000000
Popular comments
It would be great if on the midterm, in five years there is a balanced trade flow with the West and the East, with Europe and China. Right now, trade with the European Union (EU) is three times the size of trade with China, so there is room for growth. Trade with India is also much below potential, but a North-South Altay or Iran pipeline, rail and highway could change that...