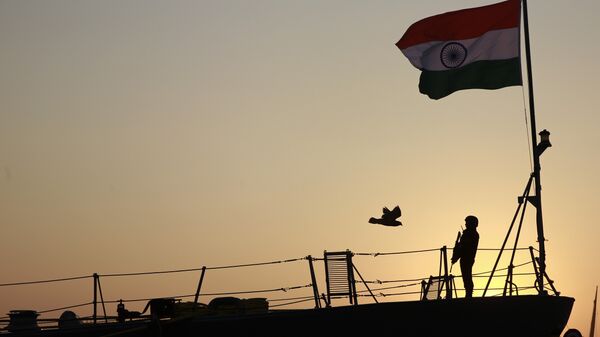 © AP Photo / Rafiq Maqbool
Subscribe
International
India
Africa
The Indian Navy has contended that the sailor was sacked as he was suffering psychiatric and gender identity problems. Since the petitioner is now a woman, she cannot be reinstated in the job she once held as the position is not open to women.

New Delhi (Sputnik) — An Indian court has directed the Indian Navy to assign an alternative job to a transsexual sailor who disclosed having had gender reassignment surgery last month. The Delhi High Court told the Indian Navy that instead of sacking the sailor, the Navy can assign her tasks similar to that assigned to injured pilots of the Indian Air Force.

After being sacked by the Indian Navy, the sailor Manish Giri had petitioned the Delhi High Court to reinstate his job in the Navy. Manish Giri, who has now changed his name to Saba Giri, had claimed that the Navy should not sack her on the basis of the sex-change procedure.

"Here is an opportunity to look at it from a different perspective. It may be a first-of-its-kind situation. Here is a person struggling with gender identity. Had she suppressed the condition and continued, it would have been dangerous. It could have been fatal. Think about it and come back," the court said.
However, the Indian Navy seems reluctant to reinstate Giri into the service.

Viral
Bundeswehr Promoting Transgender Person to Commander Post Sparks Twitter Storm
"The individual was badly infected after undergoing the sex reassignment surgery and it was the Navy which treated her humanely and provided treatment and counseling to her. One seat in another branch or department of the force cannot be blocked for such an individual who also suffered from psychiatric and gender identity problems. Since the petitioner is a female now, she cannot be employed as a sailor in the Navy as that position is not open for women," Sanjay Jain, Additional Solicitor General, appearing for the Navy in the court said.

The Indian Navy has contended that the existing service rules and regulations of the force do not permit the sailor's continued employment owing to his altered gender status, medical condition and "resultant employability restrictions."

US Judge Blocks Trump Ban on Transgenders Serving in Military
Meanwhile, Saba Giri has released a video wherein she lashes out at critics for trolling her on social media.

"Some people simply do not understand that we all are human beings. Some people have made such indiscreet, sleazy comments on the pictures and videos on social media…I am deeply hurt. I do not think they have any right to make such comments. Each and every individual deserves to live a life of their choice. Am I right or wrong? Can all of you watch me right now tell me if I am wrong? What do people get from making such horrendous comments on an individual? Don't they have mothers and sisters at home?" she says.