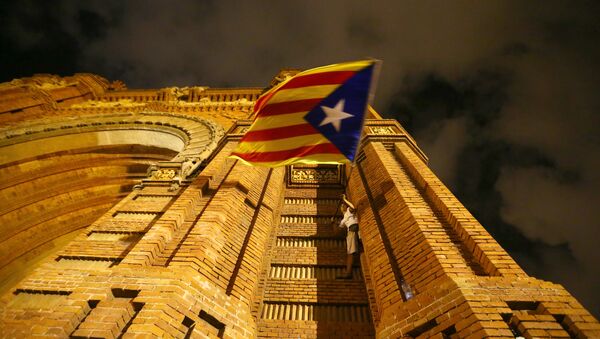 While tensions between Catalonia and Spain reached a critical level following the unilateral declaration of independence by the authorities in Barcelona and the subsequent interference of Madrid, Sputnik discussed the issue with Beatriz Hernández, research fellow at the University of Diego Portales in Chile.

The current situation in Spain can be described by only one word — "ambiguity," political analyst Beatriz Hernández said in an interview with Sputnik Mundo, commenting on Madrid's recent decision to invoke Article 155 and impose direct rule over Catalonia.

The move enabled Prime Minister Rajoy to dissolve the Spanish government and call for new regional elections in December.

However "no one knows what will happen" during the vote, except for the fact that it will take place "in a very tense" atmosphere, Portales said.

The analyst also commented on four key questions that could help us figure out how things might develop in the future.

Catalonia Should Remain Part of Spain - Spanish FM
The referendum on Catalonia's independence took place on October 1, but Article 155 of the Spanish Constitution was invoked only on October 27.

According to Hernandez, there are several reasons for such a delay. One of them is "significant differences" between the Spanish parties. Despite the fact that the move was backed up by the overwhelming majority in the Senate, it was also necessary to receive the support of other parties, like Ciudadanos and Partido Socialista Obrera Español (PSOE).

"The situation around Catalonia has caused a strong disagreement not only between Spanish traditional parties, but also among the parties in Catalonia and even among the supporters of independence themselves," the scientist said.

On October 10, Catalan leader Carles Puigdemont signed the declaration of independence, but then temporary froze it explaining the move by his intention to start a dialogue with Madrid. According to the analyst, this "ambivalent declaration" left the government without a "clear understanding," about whether it should interfere in the autonomy's affairs or not. Moreover, the communication channels were poorly coordinated.

The lack of dialogue resulted in a situation in which the ruling party Partido Popular joined with Ciudadanos and PSOE, thus ensuring a majority in the Congress and in the Senate and finally being able to invoke Article 155, Hernandez explained.

2. What will happen to Carles Puigdemon?

'Catalonia Could Be Foundation for What Will Happen Across the EU' - Economist
Earlier, several media reported that the Spanish chief prosecutor was preparing rebellion charges against deposed Catalan President Carles Puigdemont over his participation in the Parliament's unilateral declaration of independence.

At the same time, Puigdemont ignores this decision and still considers himself the lawfully elected leader of the autonomy.

Answering the question of whether the Catalan leader could face a prison term, Hernandez said that Puigdemont is unlikely to be arrested. However, if it comes to a court trial, he might be theoretically sentenced up to 15 years in prison.

"For such a sentence, however, there should be a real uprising — with the seizure of the media offices, railways, airports, etc., which was not the case. But in this case, yes, the maximum term is 15 years. Both for the top members of the Catalan government as well as individual deputies who voted in the Parliament," the analyst stated.

Meanwhile, as Catalonia's former leadership faces rebellion, sedition and embezzlement charges over the decision to hold the independence referendum, Spanish state officials have confirmed that ousted Catalan leader Carles Puigdemont had traveled to Brussels with other dismissed members of the region's government.

3. What is to expect on December 21 in Catalonia?

It is highly doubtful that on December 21 the Catalan crisis will be resolved, first of all, because of the high polarization in the society, the expert noted.

Within the movement for independence there are factions dissatisfied either with the referendum in the form in which it was organized or by the unilateral declaration of independence.

Hundreds of Companies Leave Catalonia Amid Independence Bid - Reports
On the other hand, "the government expects that on December 21 there will be a decline in the number of those supporting independence and an increase in the number of Catalans who want to remain in Spain."

The researcher recalled that only 43 percent of the electorate took part in the referendum, of which only 38 percent voted for independence.

"So, we are talking about a minority," Hernandez recalled.

"We don't know what will happen, but at least it is a good signal that there is such a pre-election climate in which the silent majority, which has not yet expressed itself in favor of Spain's unity may do it now [in the upcoming election]," the expert added.

4. What will happen to the Spanish autonomy?

The atmosphere of rivalry ahead of the elections won't resolve the existing contradictions between Madrid and Barcelona, the political analyst believes.

According to Hernandez, a long-term solution would be a reform of the Spanish political system with regard to autonomies, which would affect all regions in the country.

"We can't continue to live in tension with Catalonia and it will go on, because the supporters of independence are disappointed, they have a powerful movement, and it must be pacified by other means: political and long-term ones," the expert concluded.