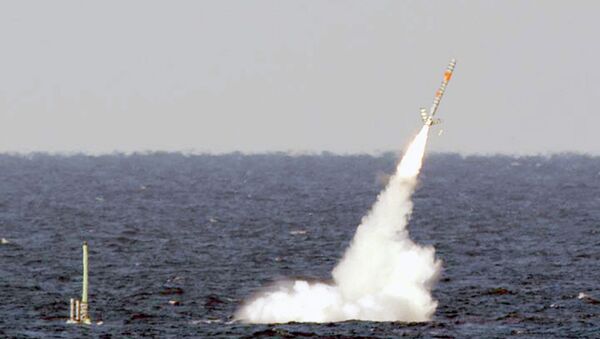 © AP Photo / US NAVY
Subscribe
During his testimony before Congress, US Defense Secretary James Mattis said that the White House has “rehearsed” their response to a North Korean nuclear attack. He added that Washington would fire a nuclear weapon at North Korea for two reasons: a North Korean attack, or a “direct imminent... attack.”

Mattis told Congress that he, the president and other key players had rehearsed their response to a nuclear strike — and the threshold of provocation that would lead the US to fire their own nuclear device. That, according to Mattis, would be "a direct imminent or actual attack."

Sen. Jim Risch (R-ID) asked Mattis what would happen if the US detected a nuclear launch. Matties replied that "the first step, of course, would be that our ballistic missile defense forces at sea and in Alaska, California — the various radars would be feeding in and they would do — they would do what they're designed to do as we make every effort to take [the missile] out."

The president has "a wide array of options, including a non-nuclear response… we would take the action the president directed and I'm sure that Congress would be intimately involved," Mattis said — although he did not elaborate what that "intimate involvement" would be.

"If we saw they were preparing to do so and it was imminent, I could imagine [a preemptive nuclear strike]. It's not the only tool in the toolkit to try to address something like that," said Mattis. An imminent nuclear launch could conceivably be taken out on the ground with an airstrike or shot down by a missile defense system once in the air.

However, decisions to protect the country are the duty of the executive, not the legislature, according to Mattis. "I believe that congressional oversight does not equate to operational control," he said. "I think that we have to keep trust, keep faith in the system that we have that has proven effective now for decades."

The "system" in question is the first strike capability, the ability for the president to unilaterally launch a nuclear missile. At all times, the president is accompanied by an aide carrying the "nuclear football," a briefcase that includes launch codes and the procedures for various types of nuclear strike. The president chooses which one he wants, the secretary of defense authorizes the pick, and then the call is made and the missile is fired with no other oversight.

Mattis praised the first strike capability system. "I would not say it's ad hoc. It's extremely rigorous: the discussions and the step through process for decision-making [that would precede a missile launch]."

Other White House top officials chimed in, including State Secretary Rex Tillerson. "The fact [is] that no president, Republican or Democrat, has ever forsworn the first strike capability. That has served us for 70 years," he said.

Sen. Chris Murphy (D-CT) asked Tillerson if the simple development of a weapon that could threaten the US — such as the experimental Hwasong-14 intercontinental ballistic missile (ICBM) that was test-fired twice in 2017 by Pyongyang — could lead to a US preemptive strike.

000000
Popular comments
Never believe what any Americans say. The end results is they WANT a war justification is not needed. Interesting part will be what dumb countries will be dragged in to this American quagmire again, Jut like Iraq, Libya, Afghanistan, Vietnam, Ukraine, and many other wars that have stayed below the radar like what is going on in Africa right now

siberianhusky
31 October 2017, 23:44 GMT3
000000
Horse crap. When the Americans keep talking about it publicly, the opposite is true. They don't dare attack North Korea. Hence all the talking.