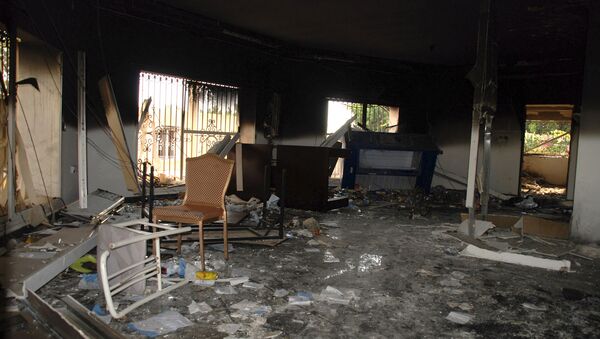 According to a White House statement released Monday, US forces have apprehended a suspect involved in the 2012 attack on the American embassy in Benghazi that killed US Ambassador Christopher Stevens and three other Americans.

In the statement, US President Donald Trump announced that the officials were acting on his orders when capturing the suspect identified as Mustafa al-Imam.

"Yesterday, on my orders, United States forces captured Mustafa al-Imam in Libya," Trump said in the statement. "Because of this successful operation, al-Imam will face justice in the United States for his alleged role in the September 11, 2012, attacks in Benghazi, which resulted in the deaths of Ambassador Christopher Stevens, Glen Doherty, Sean Smith, and Tyrone Woods — four brave Americans who were serving our country."

The raid was reportedly conducted in Libya on Saturday. Officials are now planning to transfer al-Imam to the US for prosecution in federal courts, ABC News reported.

"[The] US will spare no effort to ensure that justice is served after capturing Benghazi suspect," Rex Tillerson told reporters following the White House announcement.

Back in July 2014, Ahmed Abu Khatallah, the alleged leader of the attack was captured by Delta Force, an elite special operations team. The case against Khatallah was opened in early October, Reuters reported.

In the months following the attack, the events that took place in 2012 were the topic of several congressional hearings in which US lawmakers criticized how then-secretary of state Hillary Clinton responded to the attack.

On the night of September 11, 2012, members of the Ansar al-Sharia group attacked the American consulate which resulted in the death of Ambassador Stevens, Sean Smith, Glen Doherty and Tyrone Woods.