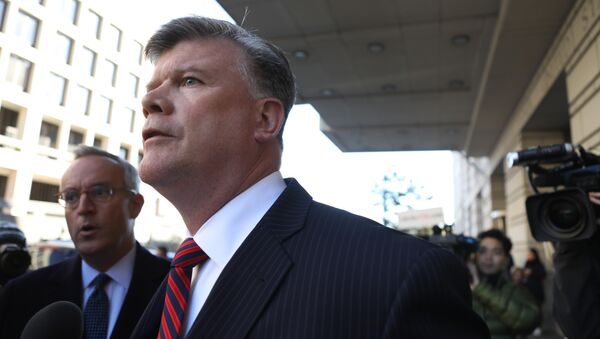 Speaking after his client's appearance in court, where he pleaded not guilty to 12 charges including conspiracy, the lawyer representing Donald Trump's former campaign manager Paul Manafort said that special counselor Robert Mueller's allegations were "ridiculous" and relied on a "very novel theory."

"You see an indictment brought by an office of special counsel that is using a very novel theory to prosecute Mr. Manafort," Manafort's lawyer Kevin Downing said, in particular regarding the Foreign Agents Registration Act charges against him. Such a FARA filing has only been applied in six cases "since 1996, and only resulted in one conviction," he said.

The government's claim — that Manafort's use of offshore accounts to transfer his money into the US constitutes concealment — is "ridiculous," Downing added.

"I think you all saw today that President Donald Trump was correct," Downing said. "There is no evidence that Mr. Manafort or the Trump campaign colluded with the Russian government."

​"The second thing about this indictment that I myself find most ridiculous is a claim that maintaining offshore accounts to bring all your funds into the united states as a scheme to conceal from the United States government is ridiculous," Downing said following Manafort's appearance before court.

​Manafort appeared in a federal Washington, DC, court on Monday where he pleaded not guilty to 12 charges, including conspiracy against the US and conspiracy to commit money laundering.

Rick Gates, one of Manafort's business partners, was also included in the indictment. According to the indictment, the duo "generated tens of millions of dollars in income as a result of their Ukraine work. Gates also plead not guilty.

Manafort's bail has been set at $10 million while Gates' was marked at $5 million.