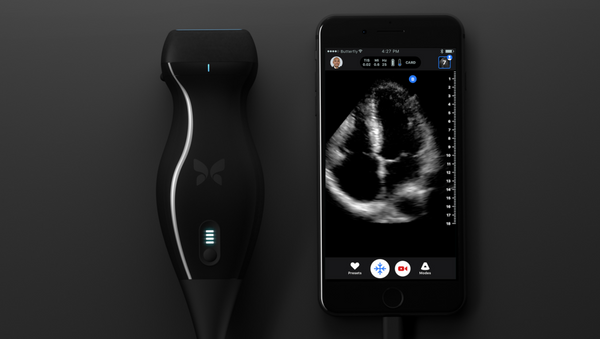 When vascular surgeon John Martin felt unusual discomfort in his throat recently, he decided to scan the painful area using a pocket-sized ultrasound imaging device compatible with his iPhone.

Martin was able to diagnose cancer with the device, which is made by Butterfly Network, where he is chief medical officer.

Martin discovered that the pain in his throat was squamous cell cancer. Since then, he has undergone surgery and radiation.

"I felt something funny in my neck, connected the probe to my phone, did an ultrasound, and there it was: My tumor," Martin said in a testimonial on Butterfly Network's website.

The average price of ultrasounds in the US is $115,000, with low-quality ones costing around $25,000, Modern Healthcare reported. According to Butterfly Network's website, this small device, called the Butterfly iQ, costs under $2,000.

The device is much cheaper than traditional ultrasound systems because it uses capacitive micro-machined ultrasound transducers, which are small ultrasonic emitters housed on a semiconductor chip. Smaller and cheaper ultrasound devices, Butterfly Network points out, can facilitate their broader use, and more and quicker diagnoses.

​"Just as putting a camera on a semiconductor chip made photography accessible to anyone with a smartphone, and putting a computer on a chip enabled the revolution in personal computing before that, Butterfly's Ultrasound-on-a-Chip technology enables a low-cost window into the human body, making high-quality diagnostic imaging accessible to anyone," Dr. Jonathan Rothberg, the founder and chairman of Butterfly Network, said in a company news release about the device.

It was while Martin was waiting for a biopsy confirmation that he realized the significance of a timely diagnosis.

"The sooner we make a diagnosis, the sooner we start treatment. The secret behind our device is we're conquering time," Martin said.

Butterfly Network will begin shipping the Butterfly iQ, which is compatible with iPhone models as old as the iPhone SE, in early 2018.