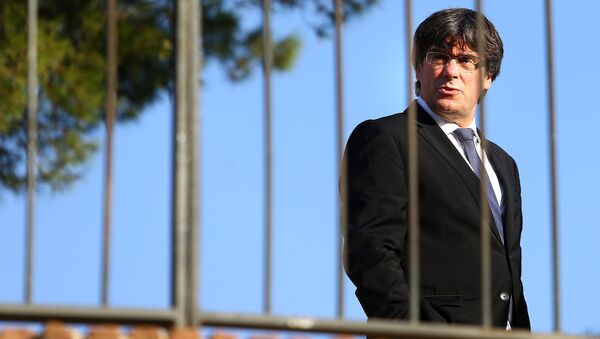 According to Spanish law, rebellion is a crime punishable by up to 30 years in jail. Charges could be levelled against Puigdemont as soon as Monday, on the first working day after Madrid’s imposition of direct rule in Catalonia.

Puigdemont said he does not recognize the order removing him from power. He has also called for "democratic opposition" to the move by the Spanish government. According to the BBC, arresting Puigdemont is likely to spark protests.

Meanwhile, Spanish Foreign Minister Alfonso Dastis said that the ousted Catalan leader could "theoretically" run in the election if he is not in jail until the vote.

"I don’t know what kind of judicial activity will happen between now and December 21. If he [Puigdemont] is not put in jail at that time I think he is not ineligible," Dastis said.

Catalan Independence for Dummies: From the UDI to Likely Next Steps
On Friday, the Catalan parliament unilaterally declared the region's independence from Spain in a secret vote. Spain's Senate responded by invoking Article 155 of the Constitution. Under the article, Madrid imposes direct rule on Catalonia, which means the dissolution of Catalonia's parliament and Generalitat.

The controversial referendum on independence was held in Catalonia on October 1 despite the fierce opposition of the central Spanish government. Only 2.26 million out of 7.5 million Catalans participated in the referendum. However, more than 90 percent of votes cast were in favor of secession. Madrid, subsequently called the vote illegal.