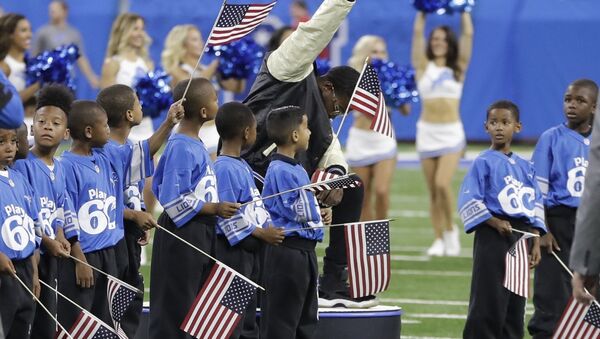 © AP Photo / Carlos Osorio
Subscribe
Americans are facing the largest social and political crisis since the Vietnam War, according to new poll results.

Results of a new poll released on Saturday reveal a stark and growing divide among Americans, suggesting that distrust, unrest and unhappiness with the US democratic system of governance is driving the biggest political division in the country since the Vietnam War, according to the Washington Post newspaper.

The survey, conducted jointly between the newspaper and the University of Maryland, showed stark political divides as a result of the nine-month-old presidency of Donald Trump and suggested that his policies, method of expression and his tactics have done more to alienate Americans from each other than anything that has occurred in the country in the past 45 years.

Answering questions that used words like ‘blame,' ‘dysfunction' and ‘proud,' as well as phrases including ‘dangerous low point,' poll results indicated that Trump's methods are the critical factor in how Americans view their democracy.

About seven in 10 participants agreed that political divisions in the US are similar to the time period surrounding the Vietnam War, according to the results. Almost six in 10 agreed with a statement suggesting that Trump is increasing the dysfunctionality of the US political system.

Noting Trump's often radical rollbacks in longstanding social programs — as well as those in health care, taxes and immigration, alongside a sharp increase in personal attacks by the president — seven in 10 poll respondents asserted that Trump and his administration are dysfunctional, while an even greater percentage, eight in 10, noted that Congress is dysfunctional.

Results revealed that just 12 percent of poll participants thought members of Congress use core values to facilitate policy, while an overwhelming 87 percent observed that lawmakers "do whatever is needed to win reelection," cited by the Washington Post newspaper.

Poll results revealed that the number of participants ashamed of how US democracy is functioning has doubled since 2014, from 18 percent to 36 percent, while over half "strongly disapprove" of Trump and agree that they are not proud of how democracy in Washington works.

A reported 81 percent of Democrats and 56 percent of Republicans in the poll noted that US politics are at a "dangerous low." An estimated 51 percent overall said that Trump deserved "a lot" of the blame, while 38 percent said it was the fault of the Republicans, and 32 percent said the fault is due to Democratic Party policies.

Some six in 10 respondents agreed that "money in politics" is at fault, while pointing out that wealthy political donors deserve much of the blame.

Responding to a statement about the news media, 75 percent agreed that media organizations are biased when reporting on political and social issues.

At least 56 percent of survey participants noted that Americans feel much less united now than at any time in recent memory, an opinion shared across political lines and demographic groups.

The survey was taken with over 1,600 US adults by the newspaper and the University of Maryland's Center for American Politics and Citizenship.

000000
Popular comments
Soros needs to be taken out and his assets frozen. Soros is a threat to USA National Security.

Zoanthropy
29 October 2017, 01:50 GMT1
000000
wow! A poll from the washington post no less! Well that will certainly show american reality to the world. (sarcasm) Seriously though, do they really need a poll to see the unsettled state of the nation and the people? Wouldn't it be far better to take a tour of the cities and countryside to see firsthand the extent of issues and problems facing america?
michael
29 October 2017, 01:57 GMT1
000000
Newsfeed
0
New firstOld first
loader
LIVE
Заголовок открываемого материала
Access to the chat has been blocked for violating the rules . You will be able to participate again through:∞. If you do not agree with the blocking, please use the feedback form
The discussion is closed. You can participate in the discussion within 24 hours after the publication of the article.
To participate in the discussion
log in or register
loader
Chats
Заголовок открываемого материала
Worldwide
InternationalEnglishEnglishMundoEspañolSpanish
Europe
DeutschlandDeutschGermanFranceFrançaisFrenchΕλλάδαΕλληνικάGreekItaliaItalianoItalianČeská republikaČeštinaCzechPolskaPolskiPolishСрбиjаСрпскиSerbianLatvijaLatviešuLatvianLietuvaLietuviųLithuanianMoldovaMoldoveneascăMoldavianБеларусьБеларускiBelarusian
Transcaucasia
ԱրմենիաՀայերենArmenianАҧсныАҧсышәалаAbkhazХуссар ИрыстонИронауОssetianსაქართველოქართულიGeorgianAzərbaycanАzərbaycancaAzerbaijani
Middle East
Sputnik عربيArabicArabicTürkiyeTürkçeTurkishSputnik ایرانPersianPersianSputnik افغانستانDariDari
Central Asia
ҚазақстанҚазақ тіліKazakhКыргызстанКыргызчаKyrgyzOʻzbekistonЎзбекчаUzbekТоҷикистонТоҷикӣTajik
East & Southeast Asia
Việt NamTiếng ViệtVietnamese日本日本語Japanese中国中文Chinese
South America
BrasilPortuguêsPortuguese
NewsfeedBreaking
11:36 GMTNew Zealand Deploys Naval Ship as Malaita Province Leader Seeks Independence from Solomon Islands
11:36 GMTUK House of Commons Discusses the 'Nationality and Borders Bill'
11:32 GMTWSJ Report on China’s Military Base on Africa’s Atlantic Coast ‘Not True' - Chinese Military Expert
11:31 GMTMinneapolis Man Arrested After Trying to 'Intimidate' Judge in Kim Potter Trial
11:14 GMTTrump's Oxygen Levels Fell 'Dangerously Low' During His Bout With COVID-19, Meadows Claims in Book
11:13 GMTChina’s Type 055 Destroyer Holds Anti-Submarine Drills Amid US Threats
11:09 GMTSouth Korea Backs Beijing Winter Olympic Games Despite US Boycott
11:04 GMTTrump Berates 'Corrupt News' Over Allegations He Was COVID-Positive Ahead of 2020 Debate With Biden
10:55 GMTLive Updates: Vladimir Putin and Joe Biden Hold Talks Amid Growing Tensions
10:52 GMTKremlin: US Decision on Beijing Olympics Can Hardly Be Called Boycott
10:45 GMTScientists Apply 'Immortality Mushroom' to Synthesise Nanogold
10:14 GMT'Blink Twice': Kamala Harris Aide 'Absolutely Loves' His Job, But Netizens Don't Buy It
10:09 GMTNovak Djokovic Signs Up for ATP Cup Amid Row Over Tennis Star's Vaccination Status
10:00 GMT'I Would Like Messi to Be Sincere': Robert Lewandowski Blasts PSG Star's Ballon d'Or Remarks
09:46 GMTPentagon Chief Concerned Over Americans' Declining Trust in US Military Under Biden
09:23 GMTCar Bomb Explosion in Southern Iraq Reportedly Kills 7 People - Video, Photo
09:14 GMTPalestinian Activist Adopts Recycling & Mass Education as PA Struggles to Cope With Piles of Waste
09:08 GMT'It's a Signal to Washington', Say Experts as India Expands Military Ties With Russia
08:58 GMTRussia Approves Flight of Two Japanese Tourists to ISS, Marking Return to Space Tourism
08:48 GMTAstroworld Tragedy: Travis Scott Asks Judge to Dismiss at Least One of 300 Lawsuits Against Him