Iraqi Kurdistan's President Will Not Run for Next Term - Reports 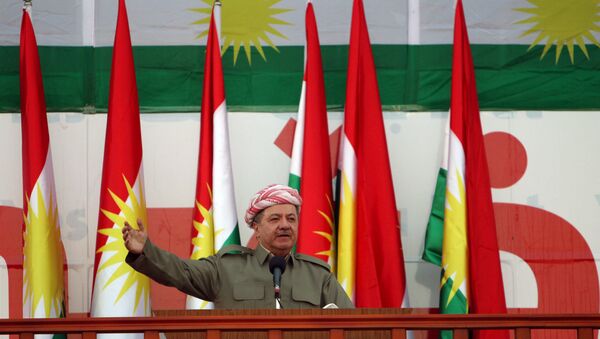 © REUTERS / Azad Lashkari
Subscribe
The President of Iraqi Kurdistan Masoud Barzani reportedly does not want to run for another presidential term after his duties expire.

CAIRO (Sputnik) — According to Sky News Arabia, Masoud Barzani is not going to extend his duties expiring on November 1.

Vahal Ali, the head of communications in Barzani's office, did not confirm or disprove this information in a comment to Sputnik According to Ali, all details concerning the fate of the Kurdish leader will be announced on Sunday at a meeting of the regional parliament, at which Barzani's address will be read.

Earlier in October, the parliament of Iraqi Kurdistan, which held an independence referendum in late September, voted to postpone the parliamentary and presidential elections for eight months.

Iraqi Kurdistan's electoral commission announced on October 18 the suspension of preparations for the general election in the autonomy slated for November 1. According to the statement, the commission has made such decision "because of not having candidates at the specified time and current new developments."

Kurdistan Opposition Demands Barzani Administration's Dissolution - Gorran Group
The previous parliamentary election in the region was held in 2013, while the latest presidential vote took place in 2009. Barzani’s term expired in 2013, but has been prolonged twice by the parliament and the court. Barzani has repeatedly said that he would not run for the presidency in the next election.

Kurdistan's crisis emerged stoked by tensions between Baghdad and Erbil after the September 25 independence referendum held in the Iraqi Kurdistan region as well as disputed areas like Kirkuk. At the vote, over 90 percent of the voters supported secession from Iraq. The referendum has been harshly opposed by Baghdad. Earlier in October, Iraqi forces, supported by Shiite militias, began an offensive on the disputed region of Kirkuk, which had been controlled by the Kurdish Peshmerga since 2014.