A Day of High Drama: What Do We Know So Far About Catalan Push for Independence 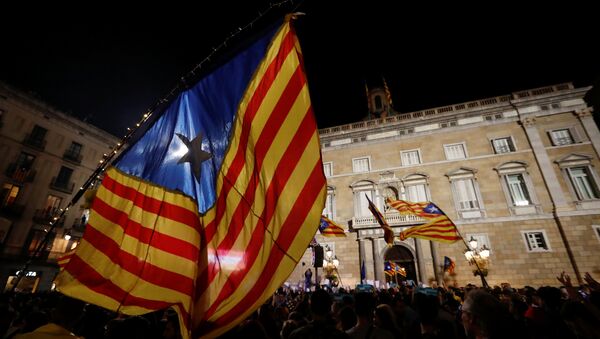 The Spanish-Catalan crisis seems to be escalating to the point-of-no-return: supporters of independence have called for a "campaign of disobedience" following Madrid's move to dissolve the region's parliament and impose direct rule. Here is a short timeline of what happened in Spain on Friday.

Catalonia seems dauntless in its efforts to break away from Spain. Secessionists have called on their fellow Catalonians to disobey the decision of the country's central government to impose direct rule over the rebellious region.

The Catalan National Assembly, an organization that hopes to achieve political independence for the region, urged civil servants not to follow orders from the Spanish government and opt for "peaceful resistance." 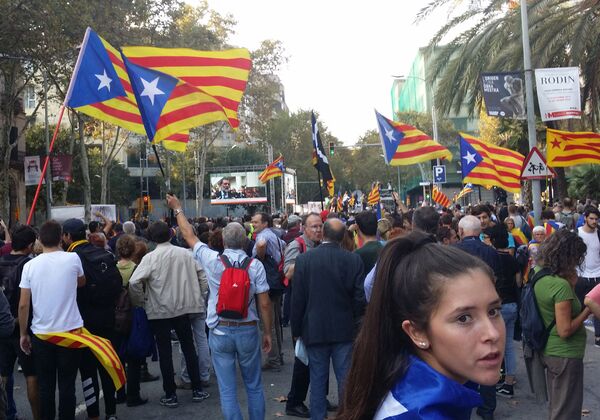 Pro-independence supporters near the building of the parliament of Catalonia.
© Sputnik / Elena Shesternina
/
Go to the photo bank

"Demonstrators might try to prevent the police from removing Catalan ministers from their offices if the central government decides to do so. This increases the risk of violent clashes with the police," Antonio Barroso, Managing Director and Deputy Director of Research at Teneo Intelligence suggested in a note to Reuters. His advisory firm focuses on Eurozone and political and economic developments in Southern Europe and France.

The Saddest Day in Spain's History

Friday, October 27, went down as one of the saddest days in Spain's modern history: just hours after the Catalan parliament declared the region an independent nation from Spain in a secret ballot, the country's Prime Minister Mariano Rajoy dissolved the regional legislative body, sacked its President Carles Puigdemont as well as its police chief, and stripped the province of its autonomy. 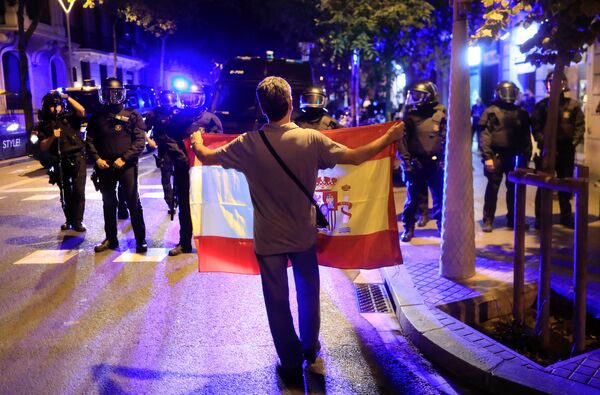 In his televised address, Rajoy stated that Madrid would take over the Catalan administration and that central government ministries will directly assume its powers until snap regional elections are held. He scheduled them for December 21.

The new administrators will take control of the regional police force, Mossos d‘Esquadra. If deemed necessary, local officers will be replaced by national police, which were sent to the autonomous community for the day of the independence referendum, October 1.

According to reports, the country's Economy Ministry has already increased its control over regional finances in an attempt to prevent the use of state funds for a possible secession bid. Madrid will maintain full financial control over the region and has reportedly started paying directly for essential services. 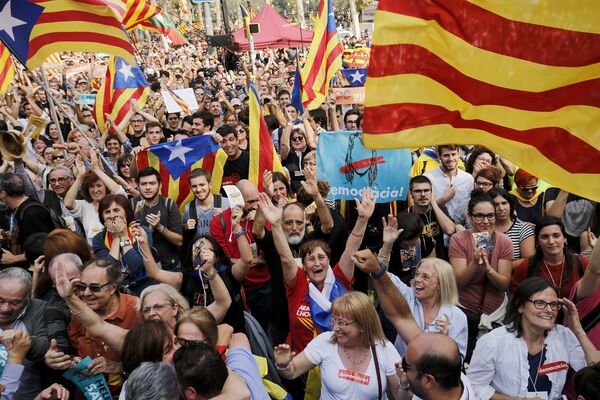 Following the decision of its parliament, thousands of Catalans gathered in Sant Jaume Square in front of the Catalan regional headquarters in Barcelona, celebrating their independence and shouting "liberty."

Judging by the mood of the crowd, many media sources suggested that there "will almost certainly be resistance in Catalonia to any move to impose Madrid's rule over the province."

​"Catalonia is and will be a land of freedom. In times of difficulty and in times of celebration. Now more than ever," ousted Catalan President Puigdemont said on Twitter.

On Sunday, the Barcelona-based newspaper El Periodico published the results of an opinion poll, which revealed that a snap regional election would probably have results similar to those of 2015, the year of the last ballot, when a coalition of pro-independence parties formed a minority government. 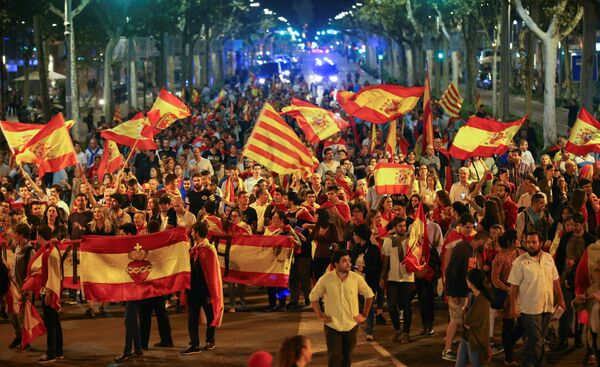 Many Twitter users have already suggested that Catalonia will eventually gain independence, as the US, Ireland and a number of other countries once did.

​Meanwhile, the President of the European Council, Donald Tusk, said that "the independence vote changed nothing and the EU would only deal with the central government."

U.S. recognition of Catalonia will happen. Clearly, Spain is currently having influence, but that won't last long.

Spain seems to be telling its #EU partners what to say about #Catalonia… https://t.co/ckLrunUtdc

​​As for other world's powers, the UK has also voiced its reluctance to recognize the region's sovereignty. The US, Germany, France, Cyprus, Turkey and Mexico have said they backed the unity of Spain.

I have already submitted a motion to the parliament. Republic of Srpska could be the first country to recognize #Catalonia's independence.

​Željka Cvijanović, Prime Minister of Republika Srpska, however, suggested that this region of Bosnia and Herzegovina could become the first to recognize Catalan independence, while its neighbor Serbia said it supports the territorial integrity of Spain.

The decision was echoed by South Ossetia, whose Foreign Minister Dmitriy Medoev told Sputnik on Saturday that it is ready to consider the recognition of Catalonia's secession from Spain, if it receives a corresponding request from the region's authorities.

A pro unity demonstrator displays a Spanish flag to Catalan Regional Police officers during a protest after the Catalan regional parliament declared independence from Spain in Barcelona, Spain, October 27, 2017
© REUTERS / Juan Medina
Newsfeed
0
Access to the chat has been blocked for violating the rules . You will be able to participate again through:∞. If you do not agree with the blocking, please use the feedback form
The discussion is closed. You can participate in the discussion within 24 hours after the publication of the article.
To participate in the discussion
log in or register
loader
Chats
Заголовок открываемого материала