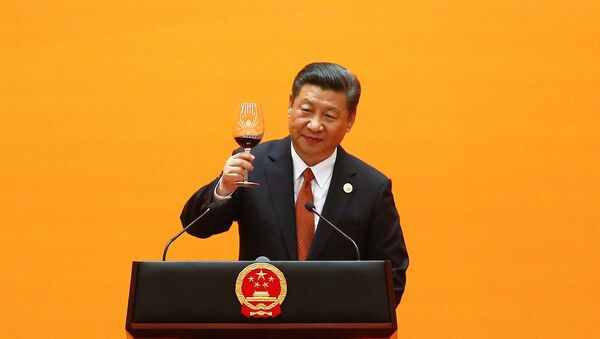 General Secretary Xi Jinping was re-elected to lead the Communist Party of China Central Committee for a second term on Wednesday amid the world's largest political party's efforts to strive for the "Two Centenary Goals". At the First Plenary Session of the 19th CPC Central Committee, Xi presented the Party's new leadership to reporters and laid down a road map for the next five years.

"I was re-elected general secretary of the CPC Central Committee," a confident Xi said against the backdrop of a giant Chinese landscape painting featuring the Great Wall.

"I see this as not just approval of my work, but also encouragement that will spur me on," he said.

Xi thanked all other members of the Party for the trust they have placed in the new leadership and vowed to work diligently to "meet our duty, fulfill our mission and be worthy of their trust".

Noting that 2018 will mark the 40th anniversary of the launch of reform and opening-up, Xi vowed to make determined efforts to comprehensively deepen reform and open still wider to the world.

The year 2019 marks the 70th anniversary of the founding of the People's Republic of China. The CPC will continue efforts to accomplish all the tasks laid down in the 13th Five-Year Plan (2016-20), develop new blueprints for China's future and see the flourishing of all the endeavors, he said.

Xi reiterated the resolve to establish a moderately prosperous society across all metrics by 2020.

He said the Party must remain committed to a people-centered philosophy of development and make steady progress toward enhancing the people's sense of fulfillment and realizing common prosperity for everyone.

"For a party that fights for the eternal well-being of the Chinese nation, the centenary only ushers in the prime of life," Xi said. "As the world's largest political party, the CPC must behave in a way commensurate with this status."

Xi said China will work with other nations to build a global community with a shared future, and make new and greater contributions to peace and development for all humanity.

A total of 452 major political parties in 165 countries have sent 855 messages of congratulation to the CPC on the congress.

Xi encouraged the media to continue to follow China's development and progress and learn about and report on more dimensions of China.

"We do not need lavish praise from others; however, we do welcome objective reporting and constructive suggestions, for this is our motto: 'Not angling for compliments, I would be content that my integrity fills the universe'," Xi said.

The CPC's "Two Centenary Goals" are not only significant for the rejuvenation of the Chinese nation, but also important for the whole world to achieve common development, analysts said.

Raza Khan, a correspondent of Dawn News in Islamabad, Pakistan, said it is remarkable for the CPC to set the target of eliminating poverty by 2020.

"China has a huge population, so lifting so many people out of poverty in recent years will be a huge achievement," he said.

China wants to share its development experiences with other countries under such frameworks as the Belt and Road Initiative, which will contribute to global economic growth, he said.

"I am sure it will be a good leadership," he said after attending the news conference.

Xi's proposal of building a community of shared future for mankind means inclusive development that is meaningful for the whole world, he added.

Jin Yong, deputy head of the School of International Studies at the Communication University of China, said Xi's speech to reporters has shown his strategic vision as the leader of a major country.

This article, written by An Baijie, was originally published in China Daily.