Access to Alternative Sources 'Made MSM Lose Their Credibility' - Analyst 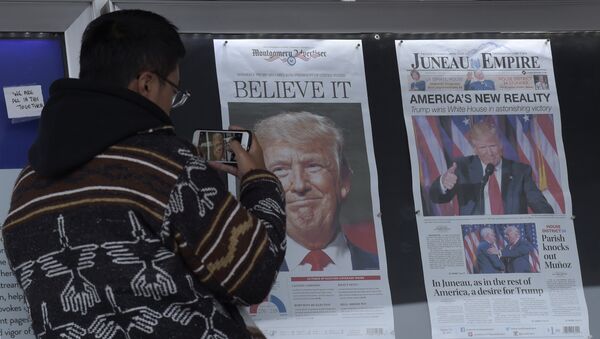 © AP Photo / Susan Walsh
Subscribe
The results of a poll commissioned by Sputnik and conducted by Ifop in the US have revealed that the majority of Americans believe that their mainstream media unfairly cover international and domestic events. A Spanish media analyst and a Dominican journalist have explained why the MSM have lost the trust of their audience.

"The results of the survey clearly demonstrate that the US mass media enjoy less and less credibility among Americans. People do understand that newspapers and broadcasters in their country have become a tool in the hands of big businesses and politicians. There is another issue, however, that with all the understanding, people are not immune to the influence of these media sources," Julián Jiménez, Spanish blogger and mass media analyst surmised to Spanish website Sputnik Mundo.

He referred to the recent poll commissioned by Sputnik and conducted by Ifop, the renowned French pollster, which revealed that as many as 59 percent of Americans think that MSM media coverage of international and domestic affairs is biased, untrustworthy and is heavily influenced by politicians and big business.

According to the expert, the Spanish also share this distrust of the national media, neither believing in the objectivity and independence of their domestic media. At the same time, the general public can be heard repeating word-for-word the lies they hear about Russia, Venezuela or Catalonia from the very same media sources they have admitted they don’t trust.

Professor Jiménez suggested that the level of distrust towards the mass media in the EU is even higher than that in the US, however, very few Europeans are eager to spend their time on searching for alternative information or to dig for the truth.

"I think there is a direct link between the decline in trust towards the national media in the US and the EU and the campaign which has been launched against RT and Sputnik. These two media sources provide far more objective and comprehensive coverage of national and international events, unlike the one-sided and predictable reporting of the mainstream media," he told Sputnik.

Exposed: Project Veritas Takes on Mainstream Media’s ‘Coercive Nature’
That is why the authorities and mainstream media use various absurd pretexts to hinder the access of these two outlets to the western audience, the expert explained. It has reached the point where El Pais, the most circulated daily newspaper in Spain, has accused RT and Sputnik of instigating the Catalan crisis in its attempt to undermine their reputation. This is a particularly dangerous line to take because while people are being put on the wrong scent, the real problems that initially ignited this conflict will only worsen. And these are purely internal problems and not engineered from abroad, he concluded.

Fernando Martínez, a journalist from the Dominican Republic, who worked for a long time in the US, has offered his opinion on the results of the survey, suggesting that the mainstream media, including in the US, have lost their competitiveness now that many diverse sources of information around the world are available for free.

According to the reporter, before the spread and the development of the Internet, the US was able to easily dominate the world’s media agenda by using simple tricks – half-truths or half-lies.

"This reminds me of The Matrix movie, in a sense that the fictional reality, which had been built by the US media for decades, is falling to pieces before our very eyes. To a large extent, it is due to media sources such as RT and Sputnik. That is why western politicians are accusing Russia of virtual information terrorism. They are so alarmed that these outlets, whose budgets pale in comparison with the western international media, so easily win the audience. However their secret is very simple: they opt to tell truth," Martínez opined.

Commenting on the recent reports that both media sources have come under intense scrutiny of authorities in the US, the journalist ruled out that they could be banned either in the EU or overseas. Russia has made it clear that it would respond symmetrically to such a decision and neither Washington nor Brussels would want to lose the Russian audience. That is why they limit themselves to threats without resorting to any radical moves, he concluded.

000000
Popular comments
The Western media is owing to its corporate sponsors, so anything to keep the viewers tuning in and the shareholders profit portfolio fat ....it's all about advertising revenue and corporate profits where RT, SPUTNIK, PRESSTV are government run without the Corporate Profit mandate plus the state run publications do have their interests at heart, that is why RT, SPUTNIK and the like require verifyable information prior to printing where the Western media just grabs out of thin air or flat makes it up, that is why RT, SPUTNIK are true News services, Western media is Tabloid Entertainment for profit.