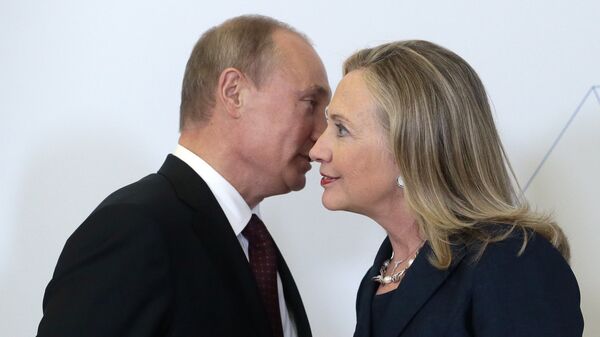 © AP Photo / Jim Watson
Subscribe
International
India
Africa
The Justice Department (DOJ) has lifted a gag order placed on an FBI informant so he can testify to Congress about a 2010 deal between the Obama White House and Russian energy companies to purchase a significant amount of American uranium production.

"As of tonight, the Department of Justice has authorized the informant to disclose to the chairmen and ranking members of the Senate Committee on the Judiciary, the House Committee on Oversight and Government Reform, and the House Permanent Select Committee on Intelligence, as well as one member of each of their staffs, any information or documents he has concerning alleged corruption or bribery involving transactions in the uranium market," said DOJ spokesman Ian Prior in a statement.

The lifting of the gag order comes just one day after Rep. Devin Nunes (R-CA), who chairs the House Intelligence Committee (HIC), announced that there would be an investigation into the deal as well as any role then-Secretary of State Hillary Clinton played in it.

The uranium deal has come under new scrutiny since mid-October, when US President Donald Trump tweeted about it. "Uranium deal to Russia, with Clinton help and Obama Administration knowledge, is the biggest story that Fake Media doesn't want to follow!" Trump wrote on October 19.

Since then, numerous other Republicans have joined the president in demanding an investigation into any potential misconduct on the part of the executive branch, the Clintons, or any other party regarding the uranium deal. Trump in the past has also alleged that Russian companies donated a great deal to the Clinton foundation, which may have related to the deal — an accusation rebuffed by the Clintons.

Sen. Charles Grassley (R-IA), the chairman of the Senate Judiciary Committee, called on the Justice Department to put an end to the non-disclosure agreement. This would allow the informant, whose identity has not been released to the public, to testify to Congress. "The executive branch does not have the authority to use non-disclosure agreements to avoid congressional scrutiny," Grassley wrote in a letter to the DOJ.

The 2010 deal pertained to the acquisition of Canadian uranium mining company Uranium One by Rosatom, the Russian state-owned nuclear corporation. As a result of the acquisition, Rosatom handles 20 percent of the US' uranium production capacity, although the deal prohibits the exporting of uranium.

When the deal was announced, the Committee on Foreign Investment in the United States (CFIUS), an interagency US government organization that reviews how foreign investments could impact national security, scrutinized the deal. They ultimately allowed it to go through.

One of the nine agencies that make up CFIUS is the State Department, which was under Clinton at the time. She told WMUR-TV in 2015 that she was not "personally involved" in the agreement.

The FBI also investigated the agreement, and The Hill reported that the bureau believed Rosatom officials were engaging in bribery, extortion, kickbacks and money laundering. They had also allegedly routed millions of dollars to the Clinton Foundation while CFIUS was deliberating on the deal. "The Russians were compromising American contractors in the nuclear industry with kickbacks and extortion threats, all of which raised legitimate national security concerns. And none of that evidence got aired before the Obama administration made those decisions," an anonymous source told The Hill.