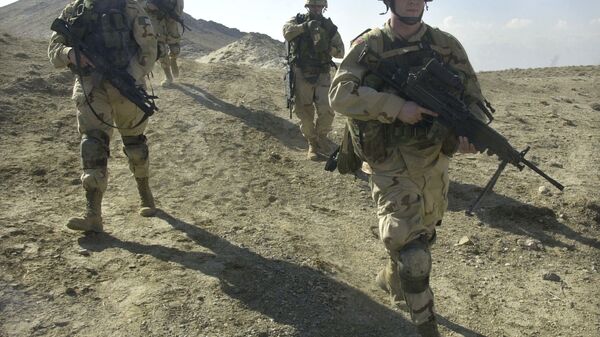 © AP Photo / Aaron Favila
Subscribe
International
India
Africa
Marvin Weinbaum, the Middle East Institute Pakistan Studies Center Director, and Brian Terell, an expert on Afghanistan, the Co-Coordinator of the Voices for Creative Nonviolence, have told Sputnik how the new strategy of the United States towards Taliban insurgency would affect Afghanistan and regional security in the near future.

WASHINGTON (Sputnik) — The United States has abandoned any peaceful negotiated solution in Afghanistan and is more determined than ever to wage a more ruthless war, despite the fact Secretary of State Rex Tillerson has been reaching out to the Taliban for peace talks, analysts told Sputnik.

On Monday, Tillerson told reporters during an unannounced trip to Afghanistan that the United States believes there are "moderate" voices among the Taliban movement.

In contrast to Tillerson’s initiative, however, the New York Times reported on Sunday that President Donald Trump’s administration has given the CIA the go-ahead to expand its covert operations in Afghanistan, including dispatching special forces teams to "hunt and kill" Taliban militants.

Earlier this month, CIA Director Mike Pompeo speaking at a security conference at the University of Texas vowed to make the CIA more vicious and unleash it against the Taliban.

Reports on the kill and hunt program approved by the Trump administration, and Pompeo’s comments, revealed the US true strategy for the Afghan conflict rather than Tillerson’s, Middle East Institute Pakistan Studies Center Director Marvin Weinbaum told Sputnik on Tuesday.

"The fact that the ‘gloves have come off’ in engaging the Taliban in Afghanistan suggests that, notwithstanding Tillerson's remark, the US has given up on the idea for the foreseeable future of finding a political solution," Weinbaum said.

Pompeo’s comments reflected the confidence of US military leaders on an offensive against the Taliban and could force it to come to the conference table on Washington’s terms, Weinbaum explained.

Ex-CIA Officer: Taliban Unlikely to Buy Tillerson 'Speculative' Offer for Talks
"The US military believes that once it has gained the upper hand against the insurgents they will be amenable to an agreement," he said.

However, the Taliban leadership was confident that they were winning too and therefore saw no need to submit to US military or diplomatic pressure, Weinbaum continued.

"In order words, both sides have roughly the same strategy and radically different goals," he said.

Weinbaum also professed bewilderment over Tillerson’s reference in his remarks to "moderate" elements of the Taliban.

"I have no idea what Tillerson has in mind in his reference to ‘moderate Taliban.’ We've been hearing this for years, mostly occasioned by the fond hope that there are those in the leadership who would want to engage in serious negotiations," he said.

However, in reality there was no evidence whatsoever that such moderate elements or individuals actually existed, Weinbaum noted.

Asia
Vinegar and Honey: US Offers to Negotiate With ‘Moderate’ Taliban Members
"These individuals have never emerged and if there are any who might agree to a power sharing arrangement they have been overruled by the top leadership," he said.

All evidence indicates that Taliban leaders have remained united both on their eventual goals and the current military and political strategies they were following to achieve them, Weinbaum observed.

"The Taliban do not speak with a single voice but the various factions all seem determined at this point to aim for a military victory that would restore an Emirate," he said.

The only time the Taliban would agree to talk is when they were confident they could call the shots, Weinbaum predicted.

"They might be willing to reach a political agreement when, acting from a position of overwhelming strength, they could dictate the terms for peace. Certainly those terms would not include their acceptance of a democratic, constitutional system," he concluded.

Despite Tillerson’s comments, Voices for Creative Nonviolence Co-Coordinator Brian Terrell, an expert on Afghanistan, told Sputnik that the Trump administration policymakers appeared determined on waging war to win a military solution in Afghanistan.

"This policy will be effective in that it will successfully prevent any resolution to the conflict in the region," he stated.

US Lacks Intelligence to Successfully Target Taliban - Ex-Canadian Diplomat
Terrell recalled that Pompeo had vowed in his comments at the University of Texas to wage an unforgiving and relentless campaign with the goal of crushing the Taliban.

"None of this sounds like someone trying to find a peaceful, just, resolution to the war in Afghanistan," he said.

Asia
Trump Won't 'Tame Taliban Insurgency' by Sending More Troops to Afghanistan
"Of course, this approach will ensure that the war does not end, that our country’s enemies will continue to multiply," he said.

Tillerson said he believed some Taliban elements wanted to end the 16-year struggle with the United States and its Afghan allies and that Washington would require such elements to renounce violence and eventually agree to join a version of the current government.

However, analysts have pointed out that the Taliban were currently retaking territory from the US-backed Afghan government of President Ashraf Ghani and therefore felt no need to compromise with or make concessions to Washington.