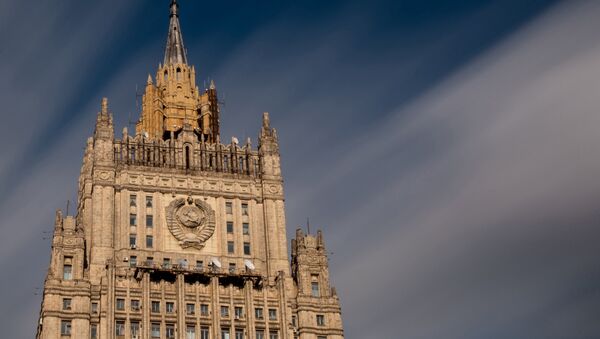 The Russian Foreign Ministry has strongly criticized the attempts to distort Moscow's position on the extension of the Organization for the Protection of Chemical Weapons (UN-OPCW) probe into alleged use of chemical weapons in Syria.

MOSCOW (Sputnik) — "Contrary to false statements from Washington, London and a number of other capitals, there is no reason to dramatize the situation in regard to the Joint Investigative Mechanism (JIM). Its current mandate expires only on November 16. More than three weeks is enough to study the expected JIM report and determine the future fate of the Mechanism," the ministry said in a statement on Wednesday.

"We call on our American colleagues to show at least minimal decency. In civilized international relations it is not customary to distort the opponent's position so rudely, caring only about "exposing" him and putting him in an unattractive light," the statement said.

OPCW Says Found Evidence of Chemical Weapons Use in Syria's Hama in March
"We confirm our intention to submit to the UN Security Council specific considerations on what should be done in order to ensure true independence, objectivity and professionalism in the investigation of offenses involving the use of chemical agents," the ministry emphasized.

According to the statement, the Western officials are ignoring systematic problems in the work of the OPCW-UN mission their real goal is not to establish the truth about the use of chemical weapons in the war-torn country, but to use relevant international bodies to increase pressure on Damascus.

On Tuesday, The White House Press Secretary Sarah Huckabee Sanders said in a briefing that Russia's veto of the US-draft resolution to extend the mandate of the UN-OPCW Joint Investigative Mechanism proved Moscow was not concerned about ending chemical attacks in Syria.

Russia Envoy Points to Absence of 'White Helmets' Video in OPCW Report on Sarin
"By blocking the extension of the Joint Investigative Mechanism, Russia has once again demonstrated it does not care about stopping the barbaric use of chemical weapons," Sanders stated on Tuesday.

Sanders pointed out that Russia blocked the UN Security Council action for the eighth time, which indicates it would continue to stand by the Syrian government of Bashar Assad.

Earlier the day, Russia vetoed the US draft resolution and calling the proposed move an attempt to divide and politicize the UN Security Council.

Previously, Russian Foreign Ministry said that Moscow tends to opt the "staging" version of the sarin incident in Syria’s Idlib Province  as the OPCW has confirmed earlier the full liquidation of Damascus's Soviet-era stockpiles.

Meantime, The US State Department has acknowledged in the issued last week travel advisory that terror groups acting in Syria were in possession of the lethal chemical weapons.