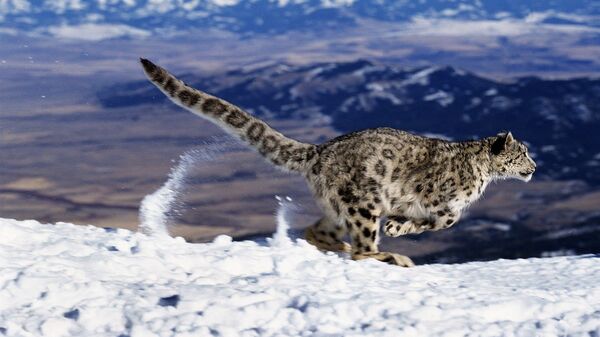 © East News / Gerard LACZ
Subscribe
The snow leopard, a vulnerable species, has been spotted more frequently in recent years in the Sanjiangyuan region of Northwest China's Qinghai Province, which marks progress on environmental protection in the area.

The Sanjiangyuan region has become the animal's most densely populated area in the world, with more than 1,000 of them th0ught to be there, according to Zhao Xiang, head of a Sanjiangyuan project that is part of the Shanshui Nature Protection Center, a Beijing animal protection organization, as reported by the news site thepaper.cn on Sunday.

The snow leopard is especially sensitive to its habitat, which needs to be free from human intervention, located at a high altitude, and biologically diverse since the animal is a carnivore, Shi Kun, head of Beijing Forestry University's College of Nature Conservation Wildlife Institute, told the Global Times.

Soft Kitty, Warm Kitty, Little Ball of Fur: Crimea Zoo's Newborn Amur Leopard
The leopard was reclassified from "endangered" to "vulnerable" by the International Union for Conservation of Nature (IUCN), in September, which reported "2,500 mature [snow leopard] individuals and an estimated decline of 20 percent over 16 years."

The Sanjiangyuan area has made progress in its protection, especially since the amount of prey for the leopards to feed on, such as the bharal, is significantly increasing, said Shi. There have also been cases in recent years of local herdsmen providing help to injured snow leopards.

Cuteness Cubed: Rare Amur Leopard Cub and Two Tiger Cubs in Crimean Safari Park
Nonetheless, the reclassification does not mean that the leopards face fewer threats than before, said Shi, who explains that the animal's biggest threat is habitat loss, which usually means human activities, including mining, housing development and grassland degradation.

To make matter worse, the snow leopard has long been hunted for its fur and its bones and other body parts which are used in traditional medicine, Shi noted.

World Wildlife Fund data show that there are possibly only 4,000 to just over 6,000 snow leopards left in the wild worldwide.

This article, written by Zhao Yusha, was originally published in the Global Times.