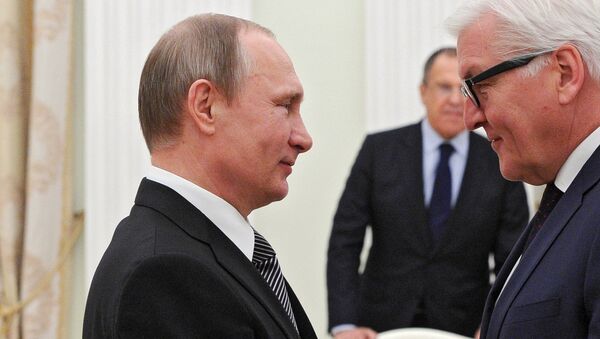 German President Frank-Walter Steinmeier has commented on his upcoming visit to Moscow to meet Russian President Vladimir Putin and search for the ways to prevent alienation between the two countries.

MOSCOW (Sputnik) – German President Frank-Walter Steinmeier said in an interview with the Russian Kommersant newspaper that his upcoming trip to Moscow would be used to figure out if there are any prospects of "restoration of the lost trust between our countries [Russia and Germany], and to find the ways of reaching this."

Steinmeier said he had no illusions about the upcoming meeting with Putin, noting that he recognized the significance of his dialogue with the Russian president, aimed for preventing further alienation between the Germans and the Russians.

Germany and Russia's Bond of War & Peace
The German president also promised not "dole out advice" to Putin. There is no doubt that the Russian leadership should and will decide by itself whom to consider its partners or even friends in Europe as a whole, and particularly in Germany, according to Steinmeier.

Steinmeier also pointed to the differences in Russia relations with the European Union and the United States, adding that, as neighbors, Russia and the European Union shared close ties in various areas, primarily cultural cooperation. However, there is mistrust and political tensions between the two sides at present, Steinmeier noted.

In Steinmeier’s point of view, one single visit cannot change the situation immediately, however, his goal is to find ways out the situation with worsening relations between Moscow and Brussels in order to elaborate a more constructive and rational approach to the existing disagreements.

Steinmeier is coming to Russia at Putin’s invitation. The Kremlin press service said earlier in October that during the meeting the two presidents will discuss the prospects for the development of bilateral relations.

Commenting on the scandal surrounding supplies of Siemens-made gas turbines to Crimea, he said that the German companies will not work with the peninsula, while the controversial situation has disrupted trust between Russian and German businesses.

"Without having accurate information, I can say that the German companies have not worked [with Crimea] and did not invest in Crimea until now. The Siemens case is particularly sensitive, because, apparently, the Russian partners made promises that had not been fulfilled in the end. This fact has broken mutual trust," Steinmeier added.

This Russian City Can Become 'New Silicon Valley' - Siemens President
In July, Siemens learned that its four gas turbines provided for a project in southern Russia's Taman had been allegedly moved to Crimea, where Russia was building two thermal plants. Following the incident, the company decided to annul a power plant supply license agreement and suspend power equipment deliveries to Russian state firms.

Commenting on the issue, Russia's Technopromexport company said it had purchased turbines for Crimean power plants on the secondary market, with Russian engineering companies upgrading them.