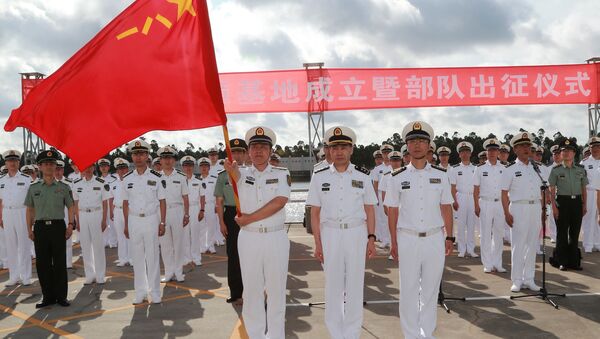 © REUTERS / Stringer
Subscribe
China's ruling party has adopted a resolution that is set to reinforce the country's armed forces, which have already been significantly modernized.

"The congress stresses that it is necessary to steadily move toward strengthening the armed forces with Chinese particularities, considering drastic changes in the field of state security and the imperative of our time to build a powerful state and mighty armed forces," a resolution adopted for the next five years by the ruling Communist Party of China at the 19th National Congress read out on Tuesday.

According to the document, China needs an upgraded army, navy, air force, missile force and strategic support force, as well as an efficient command center that could be responsible for joint military operations in a campaign.

War with China, Pakistan ‘Within the Realm of Reality’ - Indian Army Chief
Speaking at the congress last week, China's president and general secretary of the Communist Party, Xi Jinping, pledged to complete the modernization of the country's military by 2035 and to transform it into a world-class fighting force by 2050.

According to the president, the country must build powerful ground forces, an ocean-going navy, a modern air force, a strong rocket force and a capable strategic support force. Furthermore, the military must have strong joint operations capabilities between theaters and a modern combat system with "distinctive Chinese characteristics."

One Belt One Road Initiative

China Army Rocket Force Brings Russia-Made S-300 Systems to Int'l Army Games
At the same time, the resolution read that "China will persist in developing friendships and partnerships with all countries, actively promote international cooperation within the framework of the "One Belt One Road initiative.'"

The "One Belt One Road" initiative envisages the construction of infrastructure linking together dozens of countries in Africa, Asia, Europe and the Middle East.

According to the party's plan, China will also promote the formation of a new type of international relations based on respect and equality.

China's "One Belt, One Road" strategy was launched in 2013 and is aimed at developing infrastructure and strengthening ties between Eurasian countries, focusing on the land-based Silk Road Economic Belt and the 21st-century Maritime Silk Road. In May 2015, Russia and China signed an agreement aimed at combining the integration efforts of both the Eurasian Economic Union and the Silk Road project.

000000
Popular comments
i am very happy in which the direction china russia are heading.

carlos deblanco
24 October 2017, 23:43 GMT
000000
Newsfeed
0
New firstOld first
loader
LIVE
Заголовок открываемого материала
Access to the chat has been blocked for violating the rules . You will be able to participate again through:∞. If you do not agree with the blocking, please use the feedback form
The discussion is closed. You can participate in the discussion within 24 hours after the publication of the article.
To participate in the discussion
log in or register
loader
Chats
Заголовок открываемого материала
Worldwide
InternationalEnglishEnglishMundoEspañolSpanish
Europe
DeutschlandDeutschGermanFranceFrançaisFrenchΕλλάδαΕλληνικάGreekItaliaItalianoItalianČeská republikaČeštinaCzechPolskaPolskiPolishСрбиjаСрпскиSerbianLatvijaLatviešuLatvianLietuvaLietuviųLithuanianMoldovaMoldoveneascăMoldavianБеларусьБеларускiBelarusian
Transcaucasia
ԱրմենիաՀայերենArmenianАҧсныАҧсышәалаAbkhazХуссар ИрыстонИронауОssetianსაქართველოქართულიGeorgianAzərbaycanАzərbaycancaAzerbaijani
Middle East
Sputnik عربيArabicArabicTürkiyeTürkçeTurkishSputnik ایرانPersianPersianSputnik افغانستانDariDari
Central Asia
ҚазақстанҚазақ тіліKazakhКыргызстанКыргызчаKyrgyzOʻzbekistonЎзбекчаUzbekТоҷикистонТоҷикӣTajik
East & Southeast Asia
Việt NamTiếng ViệtVietnamese日本日本語Japanese中国中文Chinese
South America
BrasilPortuguêsPortuguese
NewsfeedBreaking
00:26 GMTTrump Keeps Mt. Rushmore Sculpture With His Face on It on Display in His Office
00:01 GMTA Glimpse of Hope: Biden Approval Rating Climbs 2 Points, But Still Scores Low on Economy - Poll
YesterdayAbbott Says Texas Is Ready For Possible Cold Winter Due to ‘Dozen Laws’ Signed
YesterdayBarnier Says France Has to 'Be Ruthless With the British' Amid Migrant Crisis - Report
YesterdayEx-Labour Leader Corbyn Slams 'Irrational' Suspension From Party One Year On
YesterdaySudanese Army Repels Attack by Ethiopian Troops With Casualties on Both Sides
YesterdayWHO Says No Need for Panic Over Omicron Coronavirus Strain as Much Remains Unknown
YesterdayBiden's First Christmas Tree Will Reportedly Cost Taxpayers $139,000
YesterdayMemes Flood Twitter After WHO Dubs New Covid Strain Omicron
YesterdayOmicron Coronavirus Strain May Already Be in US, Going to Spread 'All Over', Fauci Says
YesterdayNCT 2021 Walks Into a Dream in New Teaser Video 'Year Dream: Stage 2 - Surfing in Our Dreams'
YesterdayWHO Confirms Some Guesses on Why It Skipped Two Letters and Named New COVID Variant 'Omicron'
YesterdayFrance Mulls Autonomy for Caribbean 'Confetti of Empire' Amid COVID-19 Rule Protests
YesterdaySolomon Islands Gripped by Anti-China Protests as US Keeps Largely Mum
YesterdayRussia is Not Going to Attack Anyone, Ambassador to US Says
YesterdayWhy Washington's 'Russian Invasion' Scare is Cover for Kiev's New Offensive Against Donbass
YesterdayActor Seth Rogen Mocked Online For Downplaying Crime in Los Angeles
YesterdayUK PM Orders Travel Quarantine and Mask-Wearing to Combat COVID-19 Omicron Variant
YesterdayBiden Reminded of Attack on Trump for African Travel Ban He Now Emulates
YesterdayGamaleya Center Says COVID-19 Antibody Drug Will Not Be Available Earlier Than Late 2022