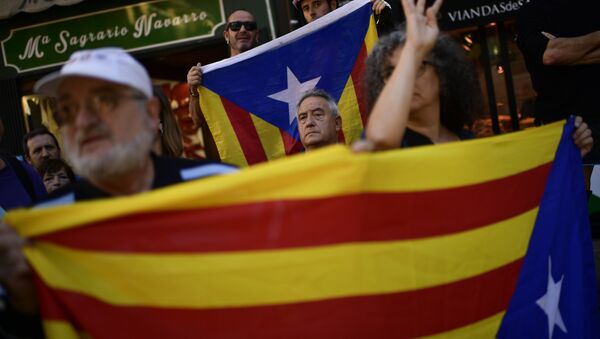 The Article 155 of the Spanish constitution may allow partial suspension of Catalonia's autonomy.

The Catalan authorities plan to appeal Madrid's decision to invoke the Article 155 in the Constitutional Court, according to regional spokesman Jordi Turull.

"Moreover, we will submit two lawsuits to the Supreme Court to invalidate the decision of the Council of Ministers."

According to the spokesman, in its legal response, Catalonia "will use all internal opportunities, but as a result, international justice may also be applied. Therefore, we use all legal possibilities. We do not exclude the option of international jurisdiction."

Moreover, a member of the left-wing pro-independence Popular Unity Candidacy (CUP) party Carles Riera has announced that the Catalan government was considering holding snap election in the region, but the party would oppose the move.

"The regional elections are a weapon to cancel the Oct.1 (referendum) and the will of the majority of Catalonia," the politician said.

The Spanish government decided at the emergency meeting on Saturday to invoke Article 155 of the Spanish Constitution, which envisages suspension of some of Catalonia's autonomy under specific conditions, in particular, dismissing head of Catalan government Carles Puigdemont, dissolving the regional parliament and holding snap elections. However, the Senate's approval is required to introduce direct rule over Catalonia cannot be secured earlier than on October 27.

Invoking Article 155 May Unlock Situation in Catalonia, Political Analyst Says
Commenting on the move, Puigdemont said a day later that Catalan institutions had been repeatedly "attacked" by Madrid and reproached Spanish King Felipe VI for lending his support to these actions of the government.

Following the move by the central authorities, the CUP party called for "mass civil disobedience" in a statement on October 23. At the same time, the nationalist Republican Left of Catalonia party on Monday urged the Catalan authorities to declare independence of the autonomous region as a response to the Madrid's move.