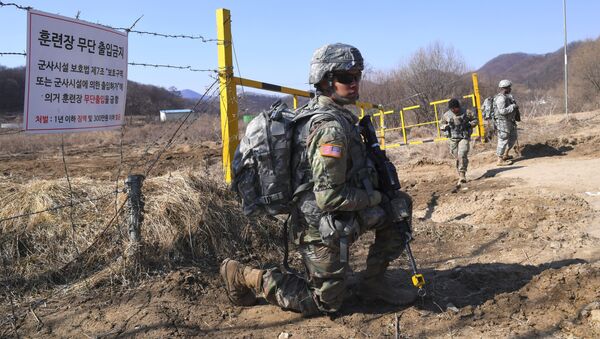 The exercises are not part of joint maritime drills, during which 28,000 US troops were deployed to South Korea amid the escalated tensions with Pyongyang.

TOKYO (Sputnik) — The US Eighth Army deployed in South Korea said Monday that it had started a regular non-combatant evacuation exercise, code-named Courageous Channel, which is expected to continue until October 27.

Each year, the US eighth Army in South Korea carries out two evacuations exercises — Courageous Channel and Focused Passage. The drills are aimed at practicing evacuation procedures for the families of the servicemen deployed in South Korea and other civilian staff of the army unit. The employees of the US diplomatic mission may also voluntarily take part in the exercise.

The command underlines that the exercise is a regular activity, which has no connection with the current developments on the Korean Peninsula.

Last week the US and South Korea launched a joint Maritime Counter Special Operations Forces Exercise (MCSOFEX), expected to last for 10 days and repeatedly criticized by North Korea. The drills involve US heavy armaments like aircraft carrier USS Ronald Reagan and Arleigh Burke-class destroyers USS Stethem and USS Mustin, all based in the Yokosuka port in Japan. Also, Washington deployed 28,000 troops to South Korea to counter the North’s perceived threat.

In its latest stance, the US disclosed that they may also put American B-52 bombers back on 24-hour alert amid the ongoing tensions.