Italy's Veneto, Lombardy Vote for Autonomy, Yet Have Long Way to Go 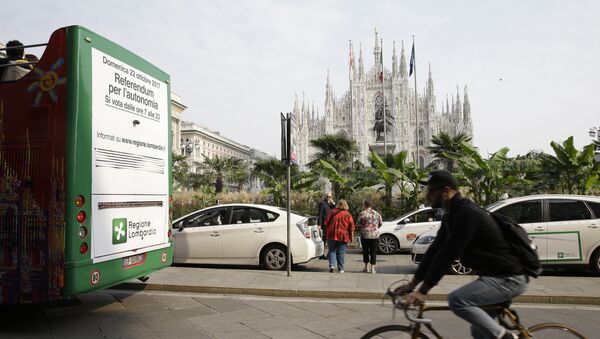 VENICE/MILAN (Sputnik) — Veneto set a turnout threshold for 50 percent plus one person, but, in the end, more than 57 percent of voters came to polling stations. Lombardy, which did not set the lower limit, had a more modest turnout of 38 percent, which still exceeded the 34 percent, which, according to Lombardy President Roberto Maroni, would have been enough to consider the vote a success.

Referendums in Lombardy, Veneto Italy's Internal Affair - Kremlin
Representatives of local politicians have mainly campaigned for larger powers and almost unanimously described the results of the vote as a success and the beginning of a long road toward autonomy.

"The results of the vote show that Veneto and Lombardy want more attention from the state. We have to start disposing of our own resources because we live in the richest regions in Italy and some of the richest in Europe. Residents are tired of having money earned by Veneto and Lombardy go to someone else instead of staying with them," Jari Colla, a member of the local council of Lombardy, told Sputnik.

According to him, residents of Veneto and Lombardy had demonstrated that they cannot accept some regions earning more at the expense of the others.

"It is a trite thing to say, but the victory in Veneto showed the unity of Venetians and allowed them to show all their unity. This is not a survey or a conversation of no consequence: more than 2 million people said 'yes,' which is much more than what president Zaia had at the latest elections. That means that even those who disagree with his policies support autonomy," Luciano Sandona, a member of the Venetian council, told Sputnik.

The regional authorities were now responsible for appraising the central government of the situation, the politician added.

Both referendums were non-binding, besides, the Italian constitution does not require regions to hold the referendum before launching talks on more autonomy, but it has clearly demonstrated the residents' position on the matter. According to Raffaele Cattaneo, president of the regional council of Lombardy, corresponding resolutions will be sent to Rome no earlier than November.

The authorities of Italy's northern Veneto region, which held a referendum on greater autonomy from the central government, plan to formally open negotiations on the issue with Rome before the country holds general elections in May 2018, a member of Veneto's regional parliament told Sputnik on Monday.

"We are aiming to sit at the negotiating table with the current government before there will be national elections in spring. And it is this [current] government that we want to start the talks with," Stefan Valdegamberi said.

Valdegamberi explained that the results of the vote would give local officials more leverage and control in the future talks with Rome.

The politician added that the document with the main demands by Veneto on the extension of its powers is currently in the final stage of preparation. Valdegamberi also noted that this document touched upon such areas as security, migration and education. Also, before starting negotiations with Rome, the regional authorities will discuss with the representatives of industry, the social sector and businesses things to be taken into account in the talks.

According to the Italian Constitution, the Aosta Valley, Friuli-Venezia Giulia, Sardinia, Sicily, and Trentino-Alto Adige are five autonomous regions with a special status. Lombardy and Veneto are hoping to achieve a similar position, which, in part, would give the regional authorities more control over the local revenue.

Over 95% of Italian Lombardy Voters in Favor of Greater Autonomy
The two northern regions are among the wealthiest in the country, responsible for a significant contribution to the country's GDP. One of their main grievances is that they send to Rome more than they receive in return, in terms of services and investments.

Veneto authorities initially wanted to hold a referendum asking residents if they would like to keep 80 percent of the local taxes, but Italy's Constitutional Court rejected the idea.

According to the latest results, 98 percent of residents of Veneto and 95 percent of Lombardy residents voted in favor of autonomy. Voters in Veneto were asked whether they want the region to have any further autonomy, while the residents of Lombardy had to decide if they would like the local government to start the talks on devolution with Rome.