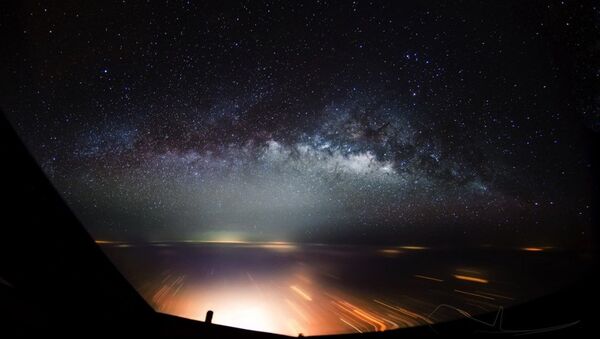 © Photo : Christiaan van Heijst
Subscribe
A group of astronomers has discovered a method of mapping distant points in space, paving the way for the first space map of our galaxy.

A team of astronomers from Bar and Spiral Structure Legacy Survey (BeSSSeL) is going to give Google a lot of catching up to do. Google just announced that they'd made a full virtual model of our solar system; now, a new method invented by the international group of researchers will allow us to map the entire galaxy — or, at least, a lot of specific points inside it.

Hubble Spots Record-Shattering Galaxy Surrounded by Super Dense Star Clusters
The method, called ‘trigonometric parallax' is actually quite simple. The scientists used a huge international array of telescopes, known as Very Long Baseline Array (VLBA), to spot clouds of water vapor in star-forming regions. These clouds shine brightly in a specific radio wave frequency range. VLBA allows scientists to measure the distance to such vapor clouds with a fair degree of accuracy — for a map whose basic measurement is 6-trillion-mile segments, aka light-years.

By repeating the measurements half a year later, when the Earth is on the opposite side of the sun, the astronomers measured slight shifts in the clouds' position in relation to the more distant galaxies — the relative difference between the two different moving objects is called parallax, hence the name. This data is enough to pinpoint the exact location of the vapor clouds using basic geometry skills.

"We put a little X on the map," Mark Reid, BeSSeL's leader and an astronomer at the Harvard- Smithsonian Center for Astrophysics in Cambridge, Massachusetts, said in an interview with Science Mag. "If we do this for hundreds of them, we see that they trace out spirals."

What's cool about the new method is that the scientists found a specific radio frequency that penetrates gas clouds and other obstacles with ease. Earlier methods that involved, for example, watching out for hydrogen clouds, only allowed us to map the denser arms of the galaxy, and were reportedly prone to errors, according Science Mag.

However with the new method, the scientists managed to map a vapor cloud shining at us from a whopping 66,000 light-years distance, located on the opposite side of the galaxy, farther from the center of the galaxy than our sun is.

"It was kind of funny, this discovery," astronomer Alberto Sanna of the Max Planck Institute for Radio Astronomy in Bonn, Germany, told Science Mag. "This is something amazing. Essentially we are looking at the other side of the galaxy."

What the astronomers need to do now is repeat the same process hundreds of times in order to piece together something of a galactic map. And that's what they have been doing since 2015, after five long years of collecting raw data from the telescopes.

"It's not like you get a Hubble [Space Telescope] space image," Reid said.

So far, some 200 bright points have been mapped with 100 yet to be done, using observations that will be made from the southern hemisphere of the Earth.

While the method does not allow the whole galaxy to be mapped, complete with all the planets and other objects, it does provide the capability to see through dust, which even Gaia, the European Space Agency's much-anticipated 2018 drone, cannot, the astronomers say.