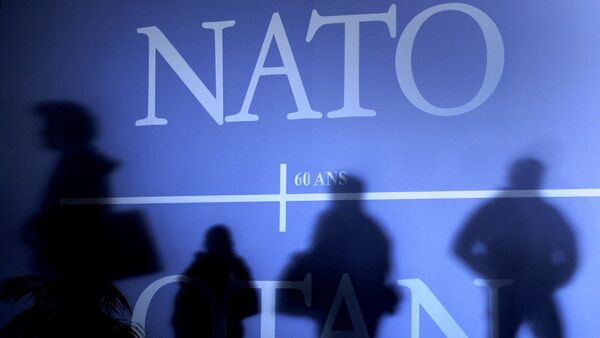 © AFP 2021 / Jean-Christophe Verhaegen
Subscribe
Following a protracted lull, lobbying for NATO has intensified once again in non-aligned Finland amid perennial fears of Russia, despite the majority of Finns preferring neutrality to military commitment.

Finland's former ambassador to Moscow and new retiree Hannu Himanen has joined the security policy debate by calling on the government to submit a membership application to NATO as soon as possible. Finland's NATO membership would create conditions for military activity in other countries, such as the Baltic States, Himanen argued.

"A NATO membership would strengthen Finland's own territorial defense and increase regional stability in a way beneficial to the country," Hannu Himanen wrote in his newly published book "West or East — Finland and the return of geopolitics," arguing that the ever-changing situation in the world implies that Finland should not hesitate to become a NATO member, since this is not an overnight process.

Imagine Russian Energy Switched Off in Finland: Food Shortages, Spike in Prices
Himanen suggested that the geopolitical situation in and around Finland has deteriorated after the conflict in Ukraine and Crimea's subsequent re-unification with Russia. For this matter, Himanen strongly opposed the idea of a referendum on joining NATO, stating that Russia would inevitably try and influence its outcome. He also argued that the present debate was "distorted," venturing that NATO lobbyists were "underrepresented."

According to Himanen, Finland should stop watching Sweden as an act to follow and think independently, even though he conceded that "it would be nice" if Sweden followed suit on that matter.

In addition, Himanen warned of a power-sharing scheme between the President and the government in foreign policy, arguing that the President should ultimately become a ceremonial head of state without power. Finland's incumbent President Sauli Niinistö hasn't been too keen on joining NATO so far and has repeatedly ruled out any possibility of Russian aggression against Finland, the Baltic States or Poland.

Himanen served as Finland's ambassador to Moscow between 2012 and 2014, and retired from the Foreign Ministry in March. After his retirement, Himanen was hired as an expert on Russia by various media outlets.

​"I do not understand those who say that we must be very careful when we speak about Russia. You have to be able to speak up," Himanen told the Finnish daily Hufvudstadsbladet.

This unbending pro-NATO rhetoric was echoed by the Swedish People's Party (SFP) presidential candidate Nils Torvalds, who called the developments in Russia "gloomy" and forecasted a severe political and economic crisis within ten years' time.

"For this reason, Finland should join NATO now that the sun is shining. When the thunderstorm breaks out, we'll already be sitting in another boat," Nils Torvalds told Hufvudstadsbladet.

​Torvalds's strong pro-NATO standpoint is what distinguishes him from his rivals in the upcoming presidential race, who either maintain a rather vague stance or are opposed to membership altogether, including the tipped winner Sauli Niinistö.

In line with Himanen, Torvalds stressed that Finland should stop seeing Sweden as some sort of poster child, stressing that there is no guarantee that Stockholm would notify Helsinki should it decide to enter NATO.

"There are other historical examples we remember too well," Nils Torvalds said, alluding to Sweden's decision to join the EU.

Foreign Minister sitting on the fence

Finnish Foreign Ministry Timo Soini, however, has once again reiterated his commitment to the "open door-policy."

Finns Less Afraid of Russia, More Unsure of NATO
Meanwhile, recent nationwide polling has shown that only 21 percent of Finns support joining NATO while 51 percent are opposed. Another 28 percent wouldn't give an opinion.

According to Jarmo Mäkelä, a longtime foreign-affairs commentator at Finland's largest newspaper Helsingin Sanomat, a clear majority of his generation and older generations are sure that Russia will never attack unless provoked.

"Seeking membership in the alliance is thus considered to be just such a provocation and Russia is now actively strengthening this point of view inside Finland," Jarmo Mäkelä told Deutsche Welle.

Meanwhile, Finland has participated in NATO's Partnership for Peace since 1994 and has been steadily increasing its contributions to the alliance. Furthermore, the Nordic nation cooperates with NATO in drills and other operations. In September, a new NATO-EU anti-hybrid warfare center opened up in Helsinki.