Clinton at Cheltenham: Why It's Time to Throw the Book at 'Literary Festivals' 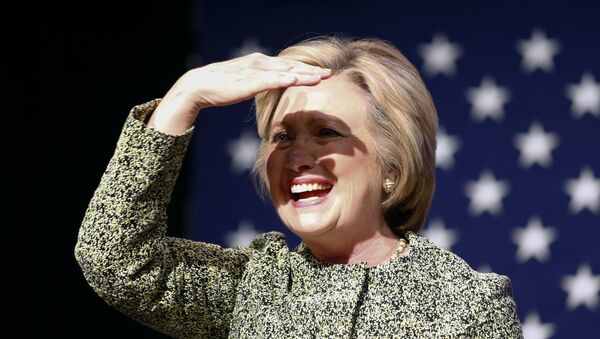 Neil Clark
All materials
Hillary Clinton's recent appearance at the Times/HSBC/Waterstones-sponsored Cheltenham Literary Festival, where she urged the west to "get tough" on Putin, Russia and its media outlets, was proof once again that these UK "festivals" have little to do with promoting great writing, but quite a lot to do with promoting neocon geopolitical narratives.

The world of UK "literary festivals" is an incredibly cliquey one — open to a certain approved few — an upper 'caste' of well-connected "Inside the Tenters," who can be sure to say the right things, whether its bashing Russia (de rigeur in 2017), or calling for "regime-change" in Syria.

Don't Call Us, We Call You!

The trick, if you want to dine at the high table, is to be a politically correct, holier-than-thou virtue-signaling "liberal" on domestic issues and a pro-war "liberal interventionist" hawk on foreign policy. Then you'll have the big literary agencies fighting over themselves to gain the rights to your latest "masterpiece," and have a standing invitation to all the "best" book events.

If you think that sounds a bit too "Dave Spartish," then consider this, dear reader.

The 2008 book The Mighty Wurlitzer by Hugh Wilford, details how the CIA in the old Cold War fought its propaganda campaign on all fronts — including in the fields of publishing and literature.

"The agency established the Congress for Cultural Freedom (CCF) in 1950. The group sponsored an unprecedented number of literary prizes, art exhibits and music festivals," writes Nancy Hanover, in her review of Wilford's work for the World Socialist Website. Hanover also notes that the CIA "worked to make book contracts available for its 'designated' writers with one of the publishing houses in which the agency had an interest."

The CCF also published more than "two dozen magazines," including the British journal Encounter, co-edited by neoconservative guru Irving Kristol, which as Hanover points out, also received funding from MI6.

In an earlier book, Who Paid the Piper? Frances Stonor Saunders also detailed how the CIA extended its tentacles in to the world of publishing and the arts. Many members of the so-called "democratic left," i.e. pro-NATO Atlanticists, were funded by the US Deep State and given top billing in CIA-backed media.

How many publications — today I wonder (whether magazines or books) receive backing — through various "fronts" from US/UK or allied intelligence agencies? It's hard to imagine the practice has stopped; in The Mighty Wurlitzer, the author says that CIA front groups were still functioning.

Gatekeepers in the big publishing houses — and in the top literary agencies certainly ensure that the "wrong" people, putting forward the "wrong" views, are kept out.

My wife Zsuzsanna, who grew up in communist Hungary in the 70s and 80s, has written a book on her generally very happy everyday experiences of living behind the so-called "Iron Curtain." She had articles published in The Guardian, New Statesman and the Mail on Sunday, all of which got a terrific response from readers from around the world, but as yet has no publishing contract. If she had been a wealthy emigre/dissident and had written an entirely bleak account of life under "goulash communism," I'm sure she'd have been speaking at Cheltenham alongside Hillary. But in 2017 — the year of the centenary of the Russian Revolution, and a new Establishment propaganda blitz against Russia — only the voices of hawkish Cold War warriors can be heard.

Voices like Anne Applebaum, the Washington Post columnist whose latest book Red Famine — which claims that Stalin deliberately starved the Ukraine — has received enormous publicity; with the book suiting the geopolitical interests of those who want to link Putin's policies towards Ukraine to Uncle Joe's.

Or Bill Browder whose book Red Notice seems to be prominently displayed in every large book shop in the country.

Then there's Victor Sebestyen with his Lenin the Dictator. He's Hungarian-born, but unlike my wife, he's a "1956-er" and not the child of a working-class factory maintenance worker from Esztergom Kertvaros.

"He has been a speaker at universities, literary festivals and conferences throughout Europe and the United States" his website tells us. What a surprise!

Things are even worse now than in Cold War 1.0. A small group of well-connected historians — all pushing Establishment-friendly narratives, predominate. Dominic Sandbrook seems to have cornered the market in writing about post-war Britain, and has done very well, trashing the 1970s, the most genuinely egalitarian decade of the 20th century. In book form — newspaper serialization — and of course in a BBC series. The Iraq-war supporting duo Niall Ferguson, an adviser to John "Bomb, Bomb, Bomb Iran" McCain's presidential campaign in 2008, and Andrew Roberts, who in 2013, fiercely berated MPs for voting against bombing the secular government in Syria that was fighting Daesh and al-Qaeda, are regulars on TV and at "literary festivals."

In 2016, Roberts won a Bradley Prize, from a foundation which supports "a vigorous defense, at home and abroad, of American ideas and institutions."

Simon Sebag Montefiore, a very well-connected scion of the famous family of bankers and diplomats, who in 2016 attacked Jeremy Corbyn and his supporters for having a world view "that is entirely different from that of virtually all Western governments" is another member of the "Establishment Historians Magic Circle."

Top authors — whether they're writing fantasies about Iraqi WMDs, Kremlin hacking plots or boy wizards — know on which side their bread is buttered. Harry Potter author JK Rowling did much to publicize the story of Bana Alabed, the little girl from a fiercely anti-Assad family who became designated "the face of Aleppo," but she and her literary friends have shown less interest in tweeting about the plight of children in war-zones in Yemen, Gaza or Raqqa.

It won't shock you to know that Bana has a book out — endorsed by Rowling on the cover — and published by the big corporate publishers Simon and Schuster, a subsidiary of CBS. Would a child from Yemen, Gaza or Raqqa landed such a deal? I very much doubt it.

'Your Book Is Simply Wonderful, Daahling…'

Part of the way the "right" books are promoted is for fellow "Inside the Tenters" to give each other's work glowing reviews. I won't single out any particular individuals, but believe me the practice goes on all the time. It's a real case of "pass the sick bucket" when you read these gushing reviews.

No one else from outside the "Magic Circle" gets a look in. For all the talk about the UK being a "meritocratic society," the upper echelons of British publishing are more of a closed shop than they were a hundred years ago. Back in the 1920s it was possible for a man like Edgar Wallace, an illegitimate son of an impecunious traveling actress, who had left school at the age of 11, to become the country's best selling-novelist. In my biography of Wallace, Stranger Than Fiction, I tell his incredible rags-to-riches story. The sad truth is that the phenomenon of Edgar Wallace, "The Man Who Made his Name," simply wouldn't happen today — as publishing is now far too cliquey. From my own experience, I know that the old British baronets who used to run publishing houses were far less elitist than today's self-styled "democrats."

The situation in the British "book world" is absolutely dire, but the good news is that a backlash against "literary festivals" and their exclusivity has begun.

In 2015, novelist Joanna Trollope claimed they valued "celebrity above writing," and said she preferred going to more egalitarian events on the continents. She also criticized the trend for bringing in "stars" from America — is that just to get bums on seats or is it to keep the CIA happy? Who knows?

In 2016, writer Beulah Maud Devaney condemned the Hay Festival — the UK's largest "literary festival" as "an unapologetic celebration of elitism." To prove the point, among the politicians at Hay this year were the former Deputy PM and banker's son Nick Clegg in conversation with neocon columnist Matthew D'Ancona, and Nick Clegg's wife Miriam Gonzalez Durantez, talking to errr… Matthew D'Ancona. And in case that wasn't enough Mr. D'Ancona for you, he was also there to talk about his new book Post-Truth: The New War on Truth and How to Fight Back.

Day two of #ClivedenLitFest – doesn’t it look extraordinary! Which talks are you excited about #booklovers? pic.twitter.com/MQ5M410Zsy

I wonder if anyone asked him about those Iraqi WMDs — and where they got to? But if we call Hay "elitist" — then how on earth can we describe the Cheltenham Literary Festival?

Speakers/performers this year included the Establishment-friendly but woefully unfunny comedians Robert Webb and Al Murray; the ludicrously pretentious windbag Salman Rushdie — (has anyone, hand on heart, ever finished a book he has written?), and the former MI5 Director General Dame Stella Rimington.

Day two of #ClivedenLitFest – doesn’t it look extraordinary! Which talks are you excited about #booklovers? pic.twitter.com/MQ5M410Zsy

If that wasn't bad enough, how about the latest "literary festival" at Cliveden, which was truly beyond parody. Described as "Britain's poshest new festival" by the Daily Telegraph, the event — earlier in October — was the brainchild of billionairess Natalie Livingstone, the new "lady of the manor." Those who paid a mere £170 (US$224) for a weekend ticket could attend a panel discussion on "Russia 1917-2017" with Simon Sebag Montefiore, Victor Sebestyen, Anne Applebaum — and Radek Sikorski, the hawkish former Foreign Minister of Poland, who is Applebaum's husband.

What a cozy little get-together! There was also a book signing with the Festival's president, Andrew Roberts (yes, him again!) and Anne Applebaum.

Others present at Cliveden included the Wall Street Journal columnist and former chair of The Man Booker Prize, Amanda Foreman, and the former Chancellor and Bullingdon Boy, George Osborne, the architect of austerity (that's austerity for you and me dear reader and not for George and his chums). "Elitist"? Perish the thought, reader!

Just about the only person who was missing who you thought would be there to reinforce the message to the assembled #booklovers about the "Russian menace" was Hillary Clinton.

I heard she had a prior engagement.