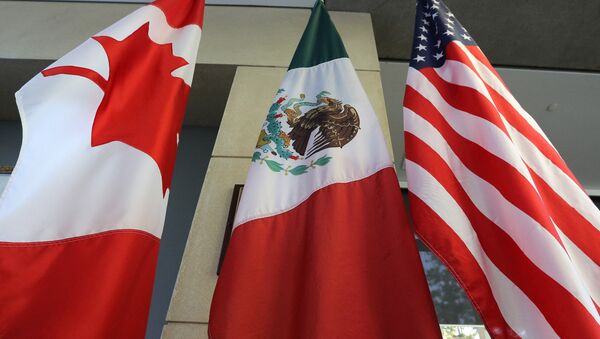 © AFP 2022 / Lars Hagberg
Subscribe
US President Donald Trump has recently demanded to re-negotiate the NAFTA agreement with Canada and Mexico. The revision of the trade deal is related to profound changes in the US economy, economist Oscar Ugarteche told Sputnik Mundo.

The NAFTA trade deal is no longer profitable for the United States due to growing robotization of its industry, Oscar Ugarteche, a research fellow at the National Autonomous University of Mexico, said.

"What the US economy and industry need today does not coincide with what they needed in 1994," the analyst said, referring to the year when the NAFTA agreement entered into force.

According to him, an important role here was played by the rapid development of the automotive industry.

"This is the industry that has been experiencing very rapid technical changes. New plants for the production of electric or hybrid cars are already being built in the United States. In Mexico, on the contrary, the plants are not expanding," Ugarteche said.

The economist noted that the production of cars in Mexico had given the American industry the advantage of cheap labor, but now this advantage has become irrelevant due to the fact that "new factories in the automotive sector are robotic and almost do not employ human workers."

Round Two of NAFTA Talks Begins Amid Rising US-Mexico Tensions
According to Ugarteche, Canada and the United States seek to relocate the automated production of electric vehicles to the Great Lakes region and make such companies as Ford, Chrysler or General Motors in charge of it.

For its turn, Mexico will most likely to be excluded from this system, the expert noted.

At the same time, Ugarteche pointed out that the US conducts negotiations without properly consulting specialists in the field or without relying on any research.

In his opinion, the collapse of NAFTA could be a "triumph for Trump," whereas for the US economy it would mean a serious "defeat," as many of its sectors profit exactly from the benefits provided by the agreement, he concluded.

The US, Canada and Mexico are trying to revise and re-negotiate their North American Free Trade Agreement, which came into effect on the first day of 1994.

President Trump has strongly criticized the pact for creating an unfair playing ground, opening the border to cheap, tariff-free goods and Mexican nationals stealing jobs from US citizens. The US leader also said that he was open to bilateral trade pacts with either Canada or Mexico if the three countries fail to re-negotiate the trade deal.