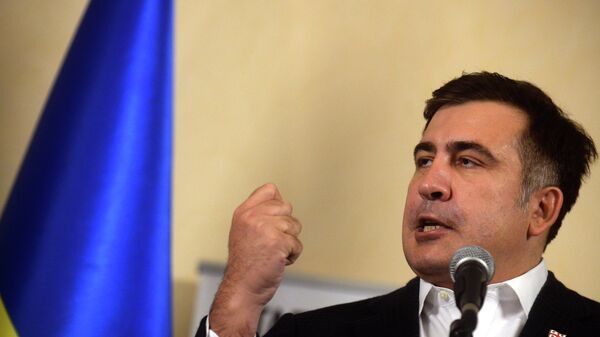 The former Odessa region governor and president of Georgia has installed a multimedia projector on Constitution Square to explain how to save Ukraine.

KIEV (Sputnik) — The former Odessa region governor and president of Georgia, Mikheil Saakashvili, presented his "Plan to Rescue Ukraine in 70 days", using the building of the Ukrainian parliament, Verkhovna Rada, as a screen, Sputnik correspondent reported from the scene on Saturday.

The politician installed a multimedia projector on Constitution Square and presented his program, explaining how to "change the country in five days of parliamentary sessions," in particular, which bills should be adopted.

Saakashvili suggested to adopt a law on impeachment, a law on oligarchs and others. Several dozen people gathered around the politician and listened to his program.

In addition, Saakashvili proposed to adopt a law "on citizens' rights to armed self-protection."

On Tuesday, several thousand people took to the streets of central Kiev, calling for governmental reforms such as the creation of anti-corruption courts and cancelation of lawmakers' immunity. The protests led to clashes between activists and security forces.

On Thursday, Ukrainian parliament started implementing some of the protesters’ demands. In particular, a bill on the revocation of lawmakers' immunity has been sent to the Constitutional Court. On Friday, Ukrainian President Petro Poroshenko said the lawmakers should "immediately start" working on finalizing the bill on the creation of anti-corruption courts.