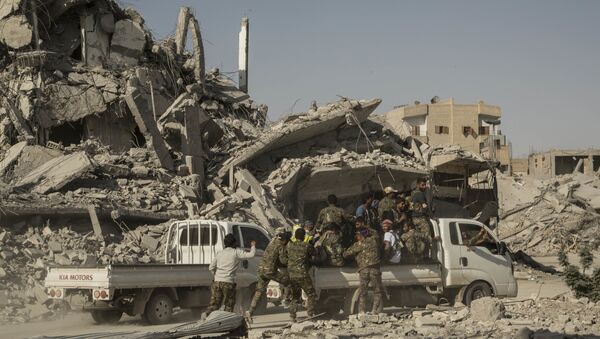 © AP Photo / Asmaa Waguih
Subscribe
The Russian Defense Ministry "has questions" about the sudden move of the anti-Daesh coalition to help civilians in Raqqa.

"[The only explanation of this] is an aspiration to quickly cover up the tracks of the barbaric bombings of the United States and the coalition's aircraft that have buried thousands of civilians liberated from the Islamic State [Daesh] under the ruins of Raqqa," Russian Defense Ministry spokesman said.

"Raqqa has not managed to cool down after bombings of the international coalition and the high-ranking officials from Washington, Paris and Berlin have started making statements about the urgent allocation of tens of millions dollars and euros to Raqqa. These millions should allegedly help to restore peaceful life in the city. We welcome such generosity, but we have questions," Konashenkov said Sunday.

According to the official, over the past two years, Russia has repeatedly asked the United States and European nations to send humanitarian aid to the Syrians affected by war, and has also prepared a list of settlements, where this assistance is needed most of all, without dividing Syrians into "bad" and "good" ones. However, the response was always negative, Konashenkov added.

"[The only explanation of this] is an aspiration to quickly cover up the tracks of the barbaric bombings by the United States and the coalition's aircraft that have buried thousands of civilians liberated from the Islamic State [Daesh] terrorist group under the ruins of Raqqa," Konashenkov added.

The spokesman added that the statements made by the US authorities, including the White House, the Pentagon and the State Department, about the crucial role of the Raqqa's liberation in the struggle against the terrorists and the contribution of the US-led coalition to this fight, also could puzzle.

He assumed that Washington might consider Raqqa was the only place controlled by Daesh in Syria, "a provincial town, with the prewar population of about 200,000 and with the population of no more than 45,000 before the beginning of the coalition's operation to liberate it that lasted for five months."

At the same time, Konashenkov claimed, the Syrian army supported by the Russian Aerospace Forces liberated the city of Deir ez-Zor in 10 days, while it was inhabited by more than 500,000 before the conflict.

On Friday October 20, the US-backed Syrian Democratic Forces (SDF), along with US President Donal Trump announced the defeat of Daesh by alliance of Kurdish and Arab militias. The US president called the victory a "critical breakthrough" and announced that a "transition into a new phase" would be forthcoming.

President Trump issues statement on Syrian forces recapturing Raqqa from ISIS. “The end of the ISIS caliphate is in sight.” pic.twitter.com/nOzQSsqfQB

Raqqa has been under Daesh control for four years, since 2013. In early June the SDF and the anti-Daesh coalition launched an operation to liberate the "capital" of Daesh self-proclaimed caliphate.

Russia, along with other countries, has been taking numerous steps to settle the Syrian crisis which turned violent since the 2011 Arab Spring protests. These efforts included humanitarian aid to Syrians and contributing to the restoration of the country.

000000
Popular comments
The USA terror coalition the biggest terror organization on the planet criminally insane.
jj42
22 October 2017, 10:12 GMT4
000000
jj42, Unfortunatly not criminaly insane... They are quite sane! They are simply profit seeking businessmen ignoring colateral damage in their quest of profit.... Or as Machiavelli put it' the ends justify the means'