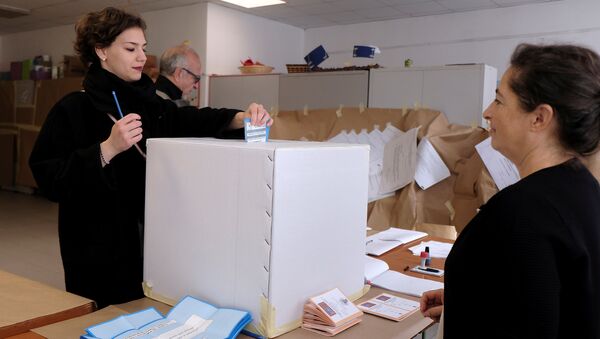 © REUTERS / Manuel Silvestri
Subscribe
Italy's northern region of Veneto, which provides the country's budget with more money than it receives, has held a non-binding referendum on gaining more autonomy this Sunday. According to local legislation, the referendum will be acknowledged as successful in case more than 50 percent of voters participate in the vote.

PADUA, Italy (Sputnik) — The residents of Italy's northern region of Veneto are actively participating in the ongoing Sunday referendum on autonomy, and there are queues at the polling stations, as the voters strive to express their will.

For First Time Ever

Veneto, as well as neighboring Lombardy, is holding a consultative non-binding plebiscite. This is the first time such a vote has been held in the history of Italy. The Lega Nord party, prominent in the regional parliaments of both Veneto and Lombardy, has long backed independence and more autonomy for the northern regions.

Domino Effect? Italy's Veneto, Lombardy Seek Autonomy After Catalan Referendum
According to the Italian constitution, five of the country's regions, namely Aosta Valley, Friuli-Venezia Giulia, Sardinia, Sicily and Trentino-Alto Adige, have special autonomous rights in line with the special statutes approved by constitutional laws. These rights allow the aforementioned regions to be more independent from Rome in the issues related to the use of finances.

Veneto and Lombardy strive for the same status. Both these regions provide the country's budget with larger sums of money than they receive from it.

The doors of the polling stations opened at 07:00 a.m. local time (06:00 GMT). Despite bad weather in the morning there were many people who wanted to cast their ballots.

A Sputnik correspondent visited a number of ballot stations in Veneto during the day. He saw a young woman in the town of Campo San Martino, who looked a bit confused, as she could not understand where she could vote. The members of the polling electoral commission helped her explaining that she only needed her ID to participate in the vote.

"I've cast the ballot and I feel that I have discharged my duty. Of course, this is a special day for me," Maria told Sputnik after voting.

Lanfranko Bernardelli said that he came to the polling station in order to make Rome listen to the voice of Veneto.

"I've come here in order to make them in Rome hear our voice, the voice of Veneto. I do not think that everything would change at once, if the 'Yes' option wins, but something should happen. It cannot continue any more," Bernardelli said.

His words are echoed by a businessman named Claudio.

"The politicians in Rome are out of touch with reality. Today we have come here to be heard. At least we hope for that and hope is the last thing to die," Claudio said.

"I am glad to see so many friends here. Of course, this is a holiday for us. Frankly speaking, I have a strange feeling, I think that you can feel something similar at the day of your wedding before the ceremony. It is a worry and joy, and an expectation of something new and very important, Canella said.

Matteo, a 33-year-old railroad worker, said that the referendum was not the initiative of any specific political party, but rather a significant event in the political life of both Veneto and Italy.

"This is not a party event, this is a will of people to provide their region with more rights and opportunities. There is nothing unusual in it if to take into consideration the fact that five Italian regions already possess such status. I hope that the citizens would use the opportunity. You have to run 42 kilometers [some 26 miles] in a marathon, however it is only the first step," Matteo said.

According to Veneto's regional legislation, the referendum will be acknowledged as successful in case more than 50 percent of voters participate in the election.

Catalonia Referendum: Will ‘Europe of Regions’ Become Viable?
Local Lega Nord activists are confident that the voter turnout rate will be much higher than the 50 percent plus one voter minimum.

Stefan Valdegamberi, a member of the Regional Council of Veneto, who proposed the idea of the region's independence in 2013 (which was rejected by the country's Constitutional Court), is sure that the ongoing plebiscite is a landmark.

"Today in the morning, I have seen in my province of Verona that there were real queues near the polling stations. I have not seen them ever before. This is the first time the residents of Veneto have an opportunity to express their will. It is really a historical event. Tomorrow will not be the same day as today," Valdegamberi told Sputnik.

The politician said that the referendum was the beginning of a new stage in Veneto's history, adding that after the announcement of the vote's results the representatives of the region would start talks with the officials in Rome on all the issues within the framework set by the Constitution.

One of the events surrounding the plebiscite was the unexpected visit of Dmitriy Medoev, the foreign minister of South Ossetia.

"My presence in Italy coincided with an important event held in the Veneto region. Today there is a regional referendum on autonomy. We, the representatives of South Ossetia, are very interested in the process of voting, in ensuring voters' rights, in creation of conditions for free expression of the will," Medoev told Sputnik.

The minister added that the South Ossetians have had a rich experience in holding referendums, as they have held five plebiscites in 25 years and know their importance for the future of their people.