'We Don't Shut Doors': Former Ambassador to US on Russia-US Relations 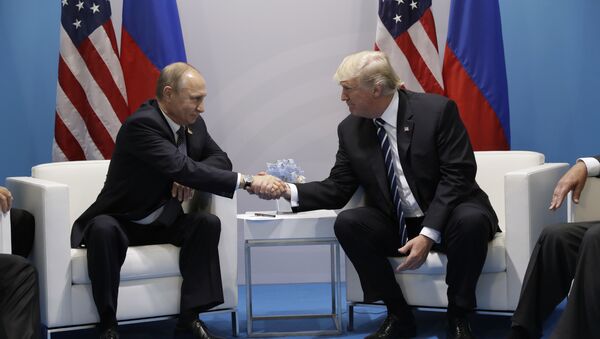 © AP Photo / Evan Vucci
Subscribe
A former Russian ambassador to the US, Sergei Kislyak, has commented on a possible thaw in US-Russia ties, while the relations between the two nations have hit the bottom.

BLAGOVESHCHENSK (Russia) (Sputnik) — There has always been room for agreement between Moscow and Washington, Sergei Kislyak, a former Russian ambassador in Washington and the first deputy chairman of the Russian Federation Council's Foreign Affairs Committee, said Sunday.

"Given all the difficulties that appeared, not at a single stage or turn did we shut the doors on the possibility to work together on the matters that are in the scope of Russia’s interests," the former ambassador added.

Kislyak noted that the domestic tensions in the US government and the controversies between the parties, the special agencies and the White House proved that the United States was ready to sacrifice relations with Russia to achieve its internal goals.

UN Disarmament Envoy Urges Russia to Discuss Nuclear Disarmament With US
However, the former ambassador added that "there are many people that have been working against Russia from the start," pushing the government to take a tough stance on Russia.

Kislyak served as the Russian ambassador to the United States in 2008-2017. Following November, the mainstream US media portrayed the ambassador as a tool for spreading Russian influence, a claim repeatedly denied by both Moscow and the Trump administration. Such US media outlets as The New York Times and The Washington Post had repeatedly released information, citing sources, about alleged links between US President Donald Trump and members of his campaign team, and Russian officials, including Kislyak.

Russia had repeatedly called on the US to stop the "bullying" campaign against Kislyak, emphasizing that his meetings with US officials were his duty as the envoy to Washington.