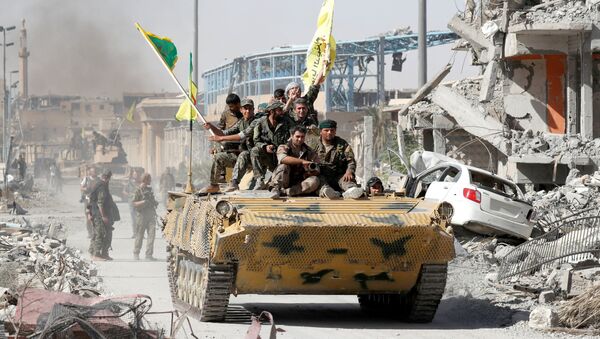 © REUTERS / Erik De Castro
Subscribe
International
India
Africa
The Syrian Democratic Forces (SDF), which are mostly composed of the Kurdish People's Protection Units (YPG), have announced the complete liberation of Raqqa from Daesh with the support of the US. Syrian military analyst, Brigadier General Muhammad Isa, explained to Sputnik what the US might be really after in this area.

Commenting on the reports of the liberation of Raqqa from Daesh, Muhammad Isa pointed out to Sputnik Arabic, that there are practically no Kurds residing in the areas which now come under the control of the SDF. In Raqqa, for example, less than 3 percent of total population is Kurdish.

The military official suggested that there is an ongoing operation to change the demographics of these territories by bringing in Kurds. The process is being controlled by the US, which is now "playing the Kurdish card" in Syria to secure a further pretext for being present in the country after the defeat of Daesh.

Syrian Kurds 'Don't Want Partition of Syria, Do Not Seek Kurdistan's Autonomy'
According to the Brigadier General, the SDF now control 50,000 square meters of Syria and its forces number no more than 20,000 servicemen. Achieving this ratio of territory to force size has only been possible with the support of the US.

However he doubted that the US would be willing to get themselves entangled in an open conflict because of the Kurds. Russia has repeatedly said that it would support the Syrian army in case of any military confrontation, be it SDF or the US. The response would be immediate.

The military official also ruled out any possible clashes between SDF and those Turkish units stationed in Idlib and on the border between the two countries, as both sides coordinate their operations with the US. Turkey however wants to grab 12,000 square meters of the Syrian territory by annexing Idlib and Aleppo, he concluded.