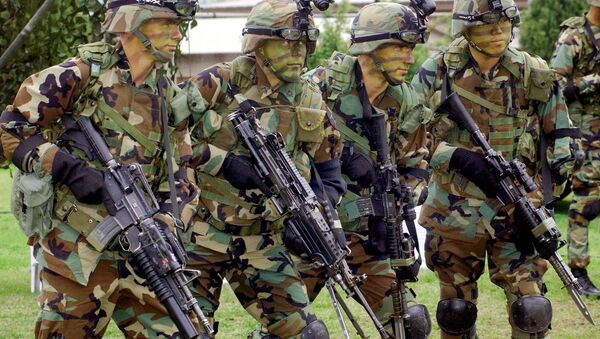 After a bloody militant attack in Niger that killed four US soldiers and five Nigerien service members earlier in October, US foreign policy critics have questioned why the US has a troop presence in countries like Niger in the first place.

Brian Becker and Walter Smolarek of Sputnik Radio's Loud & Clear were joined by anti-war activists Rory Fanning and Cindy Sheehan. Fanning is a former US Army Ranger who fought in Afghanistan before becoming a conscientious objector and public speaker, while Sheehan became a vocal opponent of the US military following the death of her son, US Army Specialist Casey Sheehan, in Iraq in 2004.

"It's not bad enough that our loved ones were killed in one of the many illegal, immoral wars that the US empire wages, but then we get so mistreated," Sheehan complained. "After we're used as political cannon fodder, then we are just pretty much just discarded by the country that supposedly is so grateful for our service."

On Thursday, Trump allegedly told Myeshia Johnson, the pregnant widow of slain Green Beret La David Johnson, that the soldier "knew what he signed up for," a comment for which he received enormous flak. The White House denied Trump said any such thing, and accused Representative Frederica Wilson (D-FL) of fabricating the story.

According to Sheehan, the political mistreatment of Gold Star families spans the political spectrum: the family of Humayun Khan, a US soldier killed in Iraq in 2004, was "used by the Democrats" during the 2016 election, as hers has been.

"My grief and the power of the antiwar movement was used by the Democrats," she said. "The question nobody is answering is: 'Why are there special forces in Niger anyway?' Why is the US even militarily involved there?"

The US military claims that its presence in Niger is to train Nigerien troops and deploy surveillance drone missions in the fight against Islamic terrorist groups in neighboring Mali, where US-ally France has been waging a war against Al-Qaeda affiliates since January 2013. Eight hundred US troops are deployed in Niger, with the permission of Niamey.

Niger is far from the only African nation to have a rarely discussed US troop presence. According to Fanning, the United States has been "conducting military operations in 49 of the 54 African countries since 2011 alone. Sixteen years of this, and unfortunately all these incidents only take away focus from the fact that many thousands of American soldiers have died since 2001, plus hundreds of thousands of people around the world, the majority of them innocent civilians."

Fanning then turned the topic of conversation to his speaking engagements in schools about his time in the Rangers. "I spend a lot of time, when I can get in front of the students here, in the Chicago public schools talking to them about the military. Chicago has 10,000 students signed up to JROTC [Junior Reserve Officers' Training Corps, a US military program aimed at high school students] which is more than any other school district. I'm in a county that's 50 percent black, 45 percent Latino. When you talk to them about the military you'd be surprised by how little they can tell you about the last 16 years."

"When they do say why they're all wearing a uniform once a week for these JROTC classes, they say that they're looking for a little bit of structure, they're looking for opportunities to pay for college. Eventually they'll say 'We want to make sure the world is a safer place, fight for freedom and democracy.' I go in front of them and tell them about my experience, and the world is a far more dangerous place as a result of the last 16 years. Between 1980 and 2001, there were 381 suicide bombings around the world, only 10 percent aimed at the US or US interests. Since 2001 there's been as many as 3,000 suicide bombs around the world, with up to 90 percent aimed at the US or US interests."

"The world is a far more dangerous place, so signing up for the military is not necessarily making the world safer, it'll make it more dangerous," said Fanning. "As far as freedom and democracy goes, national sovereignty seems to exist just for the United States. It doesn't really apply to any other country. The fact that the US is conducting military operations in the vast majority of African countries, let alone other places around the world — that's not freedom and democracy for those people. It's about making a small percentage of the population wealthier and controlling various regions of the planet."

"The conversation we need to be having is: Why are people still being killed?" Sheehan asked. "Why is the US still a military empire with Trump threatening North Korea, Iran and Venezuela militarily? We just have to be more vocal, and it doesn't matter who's president. Obama bombed seven countries, he was at war every day of his presidency, he dropped almost 27,000 bombs in his last year. We need to stop being partisan politicos and really start opposing US empire as much as possible."