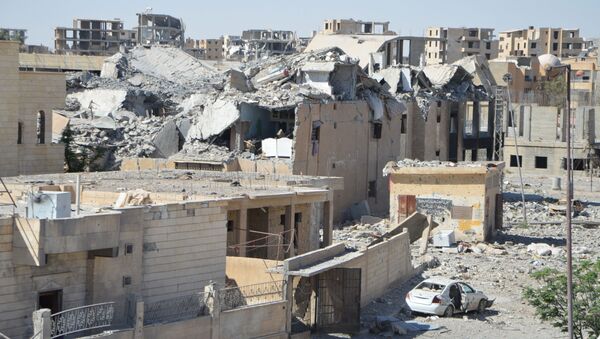 Power in the Syrian city of Raqqa will be passed to the local population, according to the statement of the US-backed coalition.

Earlier in the day the Syrian Democratic Forces (SDF), supported by the US-led coalition, announced the complete liberation of the city of Raqqa from Daesh terrorist organization militants.

"The SDF is proud to announce from the center of the city of Raqqa the victory of our forces in the great battle in which IS [Daesh] terrorists lost. Their forces were defeated in the center of the pseudo-caliphate. The city… has been liberated," the Arab-Kurdish detachments said in a press release.

According to the press release, 655 members of the detachments had been killed during the fight for the city.

Raqqa Resident: Daesh 'Killed My Father in the City Center and Made Video'
The US-led coalition in a Friday statement confirmed that Raqqa had been freed from Daesh and congratulated its Syrian Democratic Forces partners on their announcement of the victory over terrorist group.

"Daesh's loss of Mosul and now Raqqah are turning points for the terrorist organization whose leaders grow ever more distant from a dwindling number of terrorist adherents," the statement said.

READ MORE: After Daesh's Defeat in Raqqa, What Next for Syria and for the Kurds?

The city of Raqqa has been the capital of the self-proclaimed Daesh "caliphate" in Syria for some time. Once the coalition forces regained full control of Daesh stronghold, the terrorist group were left with nowhere to go.