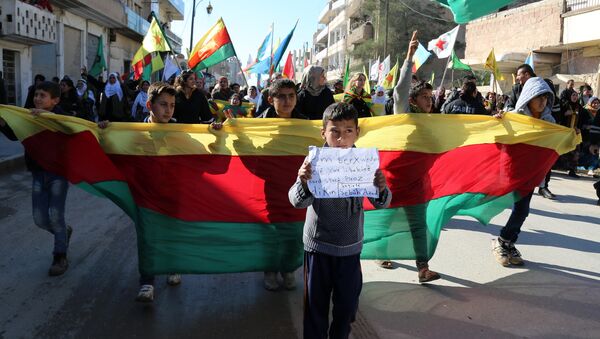 What the Syrian Kurds are actually calling for is the federalization of the whole state, Shahoz Hasan, recently elected co-chair of the Syrian Kurdish Democratic Union Party (PYD), has told Sputnik Turkiye.

"We are open for a dialogue with the central government. We do not want the partition of Syria, do not harbor plans of separating from the country and do not want to set up an independent Kurdistan. Such rumors are not true," Shahoz Hasan told Sputnik.

The politician described the recent remarks of the Syrian government that it is open to negotiations with Kurds over their demands for autonomy within Syrian borders as "late in coming."

Earlier in September, the country's Foreign Minister Walid al-Muallem said the government could discuss the Kurdish demand once Daesh (Islamic State/ISIS) is defeated. 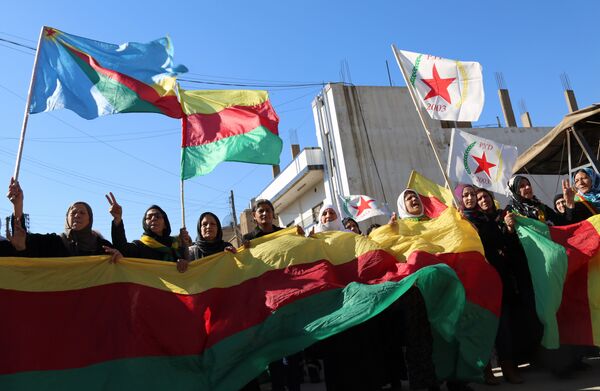 Kurdish women hold flags of the Kurdish People's Protection Units (YPG) political wing, the Democratic Union Party (PYD), and banners during a demonstration against the exclusion of Syrian-Kurds from the Geneva talks in the northeastern Syrian city of Qamishli on February 4, 2016
© AFP 2022 / DELIL SOULEIMAN

The PYD co-chair explained that the Syrian Kurds and the party are calling for a federalization of Syria. Their federal project is based on the principle of a "democratic autonomy," which would embrace the whole country.

"We are open for a dialogue and are eager to take part in negotiations on the political settlement of the Syrian crisis," he said.

Commenting further on the peace process to end the six-year-long military conflict in his home country, Shahoz Hasan specifically stressed Russia's position in the negotiations.

"We think that Russia's statements that any talks in Geneva or any other negotiation process are ineffective without Kurdish participation are very important. Russia can facilitate the settlement of the conflict, ensure that Kurds are invited. This could largely contribute to the settlement of the crisis and find a democratic, peaceful and political solution," he said.

Syrian Kurds and the US

Syrian Kurds Say Federalization of Country Will Resolve National Problems
Shahoz Hasan also addressed the relationship between the Syrian Kurds and the US, in particular, their cooperation in the military operation in Raqqa, which is led by the Syrian Democratic Forces (SDF), which are mostly composed of the People's Protection Units (YPG), a mostly Kurdish militia.

"We are fighting together with the US and coalition forces against Daesh. We have gained considerable success in this fight. We also hope for American and Russian aid in the political settlement of the conflict," he said.

However, the level of military and political cooperation between Kurds and the US is far from at the desired level, although they have regular meetings with US representatives, according to the politician.

Syrian Kurds to Help Iraqi Kurdistan in Case of Embargo

While commenting on the independence referendum for Iraqi Kurdistan, which was held on September 25, and where the overwhelming majority of Iraqi Kurds voted in favor of their sovereignty, Shahoz Hasan noted that although the result was a fair representation of the will of the people, it should have been held with participation of a larger alliance of political forces.

According to Shahoz Hasan, their relationship with the Kurdistan Democratic Party of Barzani is far from good, however his party won't respond in a likewise manner. They will keep their checkpoints open and will do their most to provide any assistance the can, he said.