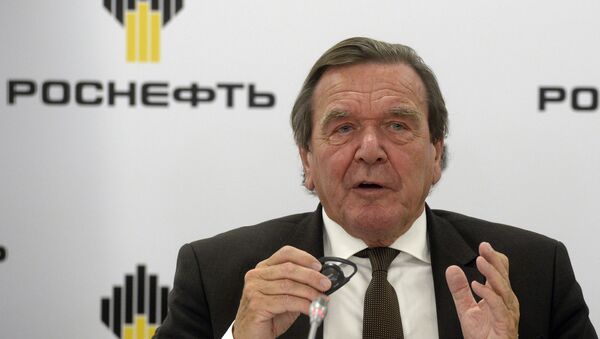 The former German Chancellor, who has recently become a board member of the Russian oil giant Rosneft amid harsh criticism from Angela Merkel, has outlined his views on the ties between Russia and its partners while speaking at the 10th Eurasian Economic Forum on Thursday.

VERONA (Sputnik) – The United States would like to weaken Russia’s energy cooperation with the European Union, despite the fact that there is "certain interest" in promoting such relations between Moscow and Brussels, Schroeder said Thursday.

In this regard, the EU and Germany, in particular, are interested in a "prosperous Russia," the politician went on to say, noting that the anti-Moscow sanctions are "isolating and destabilizing" Russia and should be lifted.

"The United States believes it is possible to isolate Russia. From the political viewpoint, this is pointless, and it is dangerous from the economic point of view," Schroeder pointed out, noting that Washington is seeking to weaken Moscow.

Schroeder, who was elected a new member of the board of directors of Rosneft in October, has been a vocal supporter of the improvement of Europe's ties with Russia. In late September, he said he regretted the sanctions and accused his opponents of attempting to drag Germany into a new Cold War.

​The Western powers, including the United States and the European Union, slapped Moscow with individual and business sanctions over Russia's reunification with Crimea and alleged meddling in the Ukrainian affairs in 2014. In turn, the Kremlin moved to impose a full ban on food imports from the countries that supported restrictive measures against Russia.