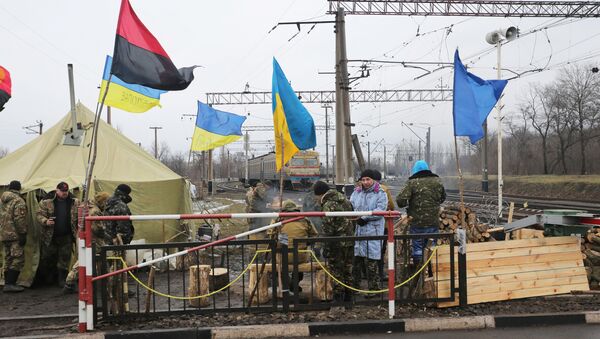 © AFP 2021 / Aleksey FILIPPOV
Subscribe
Remarkable progress was achieved with signing the Minsk peace agreements which ended violence in the war-torn east of Ukraine. However, the bill on the reintegration of the eastern regions adopted by the Ukrainian authorities runs counter to the agreements and threatens to ruin the whole architecture of the political settlement.

MOSCOW (Sputnik) — Russia has been and will continue to be a guarantor of the Minsk agreements that lay out the conditions for the peaceful resolution of the conflict between Kiev and regions in eastern Ukraine, Kremlin spokesman Dmitry Peskov said Thursday.

The Minsk peace accords lay out a detailed 13 point-roadmap toward the settlement of the Ukrainian crisis. First and foremost, the agreements stipulate a complete ceasefire and withdrawal of all heavy weapons in order to create a security zone. However, the accords extend beyond a cessation of hostilities as they also include implementation of fundamental reforms in Ukraine in order to decentralize power and give to the Donetsk and Lugansk regions a special status.

The Minsk agreements were signed in February 2015 by the parties to the Ukrainian conflict and brokered by leaders of the Normandy Four group (France, Germany, Russia and Ukraine) as the main step toward the peaceful resolution of the conflict in the east of Ukraine.

Moscow Concerned Over Kiev's Readiness to Ignore Minsk Deal - Foreign Ministry
Kiev's authorities constantly undermine the accords and reverse the process of political settlement. In October, the Ukrainian parliament adopted a bill on the reintegration of the eastern region, known as Donbass, in the first reading, having scrapped all mentions of the Minsk peace accords. In the legislature the Donbass region is referred to as "temporarily occupied territories" and Ukraine's president is entitled to use the armed forces without parliament's approval.

Moreover, according to the bill, certain areas of Donbass not controlled by Kiev would receive special status only after local elections held under Ukrainian legislation and under control of international observers. Western politicians believe that elections can take place only after the Ukrainian authorities get access to the whole territory of the eastern Ukraine and international observers are sent to the region. Vladimir Putin supports the idea to deploy the UN peacekeepers along the line of contact in order to protect OSCE monitors. However, Poroshenko has different views on it as he suggests a fully fledged operation with a mandate covering the whole area including the border with Russia. It prompts speculations that it is Poroshenko's way to "contain" Russia, although there is no proof of alleged Russian military backing of the insurgent region.